Siddhartha Gautam after enlightenment came to Rajgriha from Gaya and was received by Bimbisara somewhere near yasthivana (now Jethian). Xuanzang’s account describes the whole stretch from Bodh Gaya to Rajgriha scattered with auspicious spots associated with Buddha and his disciples, which were part of Buddhist pilgrimage at the time of his visit. This is further corroborated with the references of other travelogues. There are strong indications that suggest that this pilgrimage path was in frequent use till 14th century and abruptly came to an end without leaving any traces of its existence behind.
After the rediscovery of Buddhism in India and identification of places associated with Buddha, the path again came into focus but the condition of the 18km path was not suitable for the Pilgrims to tread. 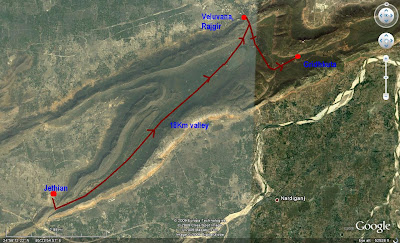 One of the most important effect of CM’s visit to the area and realizing the underlined potential is the revival of the footsteps of Buddha trail that would also include this particular stretch. A 70 Km trail is now in the process of being developed as the first leg of “Engaged Buddhism”. In the initial phase, the CM visited five villages and the plan is to involve the entire community in developing tourism related recourses and build capacity for Guide services, home stays of tourists, handicrafts and souvenirs and not to mention some local cuisine would also be part of the palate. 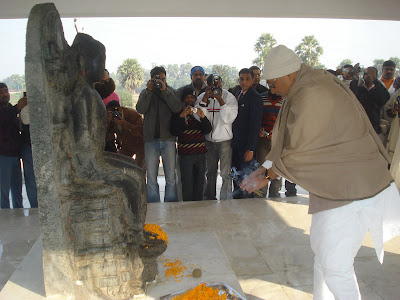 CM asked District Magistrate of Gaya to get in touch with Buddhist monasteries and explore the possibilities of developing this pilgrimage route. He also assured that once the route is in service there would be ample security provided through deployment of necessary police force to ensure a safe walk through the Jethian valley. This 18Km stretch will be meant only for pedestrian traffic and no vehicle will be permitted on this route except for access to emergency vehicles.

A few monks visiting from South-East Asian countries were interested in taking this route in its present condition rather than waiting for a next trip in the hope of better road and travel conditions; CM respected the wishes of the monks and instructed the Gaya and Nalanda district administration to make necessary arrangements for their safe travel through the area.
Posted by Shalini at 5:10:00 AM

It was nice reading your blog. Marvelous work!. A blog is brilliantly written and provides all necessary information I really like this site. India is also one of the most popular destinations among international tourist. Such a very beautiful blog! Visiting Gaya by car is a very good way to enjoy the trip according to your time requirement. If you have any requirements for Taxi Services in Gaya then you can book through our website.