In year 2011, Nava Nalanda Mahavihara Sanskrktik Gram (NNMSG, a Unit of Nava Nalanda Mahavihara) conceived Mahakassapa Plaque (Saṅghassa Patiṭṭhāpako Mahākassapa Yāvajīvam Sammānopādhi) to honor individuals and institutions that have made exemplary contributions towards awareness generation  and  protection of the rich Buddhist legacy of the Bihar.
Jeṭhian village is settled over the remains of ancient Yasthivana, a place associated with the sublime wandering of the Buddha. "Bhagwan Buddha Gram Vikas Samiti" a village based institution established by village elders from village Jeṭhian did a very exemplary work towards the protection and promotion of the heritage of Jeṭhian.  For their exemplary the "Bhagwan Buddha Gram Vikas Samiti" was awarded the third Saṅghassa Patiṭṭhāpako Mahākassapa Yāvajīvam Sammānopādhi at the "Engaged Buddhism" Workshop held at Nava Nalanda Mahavihara on 27th September, 2013.


READ MORE: In 2011, the First Mahakassapa Honour was given to Shri Ram Pukar Singh Ji for his exemplary  contributions towards the heritage of Chechar.

Jeṭhian valley retains a unique assemblage of valued cultural heritage places with relating to the sublime wanderings of the Buddha. It was here at Supatiṭṭha Cetiya that the Buddha stayed during his first visit to Rājagaha (Rajgir) from Gayāsīsa (Brahmayoni Mountain, Gaya), after his Enlightenment. It was here Bimbisāra and thousands of followers visited the Buddha and Uruvelā Kassapa, who was also present. Bimbisāra and the people began to have doubts as to who was practicing under whom, but Uruvelā Kassapa quickly dispelled their doubts by declaring his acceptance of the Buddha as his teacher.
Read More: Buddha welcomed at Latthivanuyyāna ( Jethian)
Venerable Xuanzang stayed here and studied under the eminent monk-scholar, Jayasena. In his writings, Venerable Xuanzang gave a detailed description of Asura Cave and its surroundings where the Buddha gave teachings. The landscape, features, and archaeological sites of the Jeṭhian valley are treasures with distinct value that provide visible evidence of the continuity between past, present and future. In the 1990s, Venerable Satori Hanaoka, while staying at Bodhgaya, visited Jeṭhian and realized the need to protect and generate awareness towards this important place associated with the sublime wandering of the Buddha. 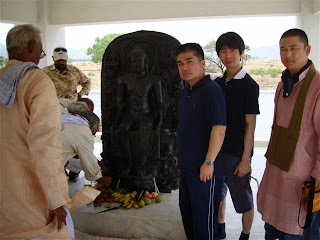 Venerable Satori Hanaoka and others at Buddha Mandap

Read More: Heritage of Jethian
In 1999, Venerable Satori Hanaoka along with the Venerable Gencyu Hayase and Venerable. Kenryu Ito of the Japanese All Kochi Young Buddhist Association visited Jeṭhian with the determination to setup a temple to safeguard ancient sculptures scattered throughout the Jeṭhian valley. The heritage conscious community of Jeṭhian responded by setting up a “Bhagwan Buddha Gram Vikas Samiti,” a committee of village elders to facilitate development activity and generate awareness towards the rich heritage of Jeṭhian valley. That same year, the foundation of the “Buddha Manḍap” was laid. In 2000, the temple was inaugurated and has since created a strong relationship of mutual trust between the All Kochi Young Buddhist Association, Japan, and the Bhagwan Buddha Gram Vikas Samiti, Jeṭhian. Venerable Hanaoka and his team from Japan regularly visit the Jeṭhian Valley. Together with mutual cooperation from the local community, they are revitalizing this site brick by brick.
Posted by Deepak Anand at 10:01:00 AM 0 comments 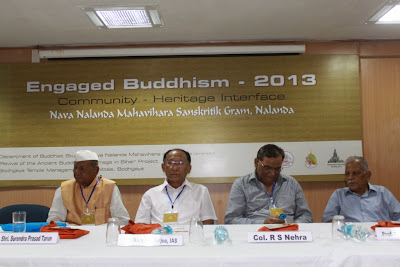 Engaged Buddhism-2013- Chief Guest and dignitaries on the Dais

The “Engaged Buddhism” initiative is conceived to promote Community-Heritage interface in Bihar. All ancient Buddhist literature indicates the deep association of the Buddha, the Dhamma and the Saṅgha with Magadha, the kingdom of King Bimbisāra. A culture of patronage that was established by King Bimbisāra and cemented further by Emperor Ashoka took its root in the heartland of Magadha. Because of its sacredness and culture of local patronage, Magadha over the next 1500 years after the Mahāparinirvāṇa of the Buddha, became a conglomerate of Buddhist monasteries of various traditions. Literary evidence suggests that receiving patronage from kings and patrons, the best monks from far-off Buddhist lands vied to establish monasteries in this sacred land of Magadha. Monks, scholars and the followers of the teachings of the Buddha from all over Buddhist lands took years to make the arduous journey to visit this land to practice and collect manuscripts of the true teachings of the Buddha and pay pilgrimage to the sacred traces of the Buddha and his prominent disciples.

Magadha was distinguished by two groups: one was the Buddhist institutions and practicing monks from all over the Buddhist lands and the other was villages and the community supporting the monks and institutions. This relationship between the two groups was symbiotic in that monks and Buddhist institutions provided a “Dhamma ambience” and also facilitated rituals and in return villages supported the daily needs of the Saṅgha. Venerable Xuanzang witnessed this ambience and visited many of the monasteries in Magadha. His records mention at least 50 monasteries in Magadha. This number most likely multiplied over the next few centuries, reaching its peak during the Pala-Sena period (8th-12thcentury CE) as reflected in the vast ancient remains scattered in the Magadha region.

Since ancient times, this sacred piece of land has been a place of proliferation of new schools of thought. Buddhist literature reveals that many prominent teachers with great followings coexisted in Magadha. As per tradition, after the usual exchange of greetings when any two people met, they would enquire as to which teacher they were following. There was a peaceful coexistence among the various schools of thought. In the second half of the first millenia CE, monasteries and monk-scholars from the monasteries of Magadha acted as Dhammadūta and facilitated development of Dhamma in far-off lands. Monks from Magadha carefully camouflaged the Dhamma within a variety local traditions and rituals while maintaining the true teachings and practice at the core. As the Dhamma was developing elsewhere, Buddhist monasteries continued to interact with the cultural beliefs within the local communities of Magadha. Centuries of such interaction led to an emergence of a pantheon of deities. With existing icons, monk-scholars and monasteries of Magadha facilitated the conception, design, and development of the vast and extensive Buddhist iconography, which is appreciated in the world today and as reflected in sculptures and artifacts throughout the Live-Museum of Magadha.
Literary evidence and archaeological finds suggest that the monastery-community symbiosis and the elaborate Buddhist pilgrimage had fluctuating periods of increases and decreases. During good times, monasteries were renewed time and again, as well as, the building of new monasteries. During periods of adversity, monks left their monasteries and only returned when a supporting regime created a conducive environment for them to return. Monasteries somehow survived these times of adversity showing us the strong resilience of the monastery-community symbiosis over its 1500 year journey.
The travelogues of Tibetan monk-scholar Venerable Dharmaswāmin very thoroughly narrate the scenario of the early 13thcentury CE when monks would run away into forests to escape the swords of Turks, returning in a few days or weeks hoping that the turmoil had ended. Continuing in this way for at least 100 years, the majority of monasteries simply vanished, while a few key monks managed to survive at key places with the hope that Magadha would emerge once again. As fate would have it, the new circumstances were no longer conducive for the growth and sustenance of monasteries of Magadha. This led to the gradual death of the symbiotic relationship between monastery and community.

With the exit of the monks, Magadha was left with pockets of monastic remains scattered throughout Magadha. In the next few years and decades, these monastic remains were populated by people from the surrounding communities. Monasteries fell to ruin over the next few centuries and eventually became covered under layers of bio mass. New populations who settled over and around these mounds were ill equipped to handle the vast amount of religious artifacts. A few temples with images of Buddhist and Hindu deities continued to be used for worship, but due to a lack of resources and patronage over the next few centuries, these also eventually fell to ruin, leading to sculptures left out under the open sky.
Populations that had settled over the monastic remains kept discovering sculptures and artifacts and villages slowly developed collectives at a few sites within the villages. But for all such collectives, worship of sculptures started in the open under the shade of trees, without any thought of protection for these sculptures. As we foray into present-day villages this practice still continues with collectives called Goraiyānsthān, probably a corruption of the word Guru-Sthān, meaning teacher’s place.
Read More: Engaged Buddhism Workshop 2012
In the early 18th century, the vast tangible heritage in India in general and Bihar in particular generated much curiosity and subsequent research and studies established the Buddhist origin of Bihar. During this time, sculptures and artifacts lost their inherent definition of an object of worship and instead were labeled works of art. As such, they were “legally” removed from their original sites and placed in museums, drawing rooms, and personal collections. The community was a mute spectator to what was happening to their religious heritage; something that did not just happen in Bihar and India, but across Asia, Africa, and South America and is still going on. This was carried it out earlier because of colonial powers and now encouraged through illegal spurious trade.

Communities are still using the centuries-old traditional way of worshiping sculptures in the open. This has led to inevitable loss, as collections have been robbed over the years. Villagers narrate how they once had collectives of hundreds of sculptures, but over the past fifty years, only few remain. In the recent past, Bihar has begun to wake up to its past. Signs of a reemergence of Magadha’s glory have been revealed over the past few years as communities are becoming more aware of their heritage. Many villages are now building temples to shade and protect such collectives. The sanctity of this live-museum of Magadha must be communicated to the world. When the world realizes the inherent beauty of this live-museum, it will partake in the reemergence of Magadha and its rich heritage; its association with the sublime wandering of the Buddha.

As communities live with the tangible and intangible heritage of Bihar, efforts to generate awareness to the community at large of this heritage as being a part of long Buddhist history that needs to be preserved for all posterity to appreciate has begun. This is one more phase in the long journey of the true teachings of the Buddha for the world to become aware and contribute towards its revitalization. With this broad objective, Nava Nalanda Mahavihara (NNM) initiated an initiative to photo-document this “Live-Museum” of Magadha; capturing how the community lives with this heritage, making it a part of their rituals, and why it needs to be respected, safeguarded and restored. With world awareness towards the sanctity and beauty of the “Live-museum” of Magadha, we hope deep in our hearts that the next century will help to reverse the process of heritage loss and bring the religious sculptures back to their origins.
In the workshop, individuals from different villages share their stories about how they have been contributing towards safeguarding the heritage.