Due to present-day forest management practices, many important ancient Buddhist sites now come under Forest Law, which often deprives the development of sites for the pilgrimage. Though there is a general understanding that developing these sites for the ancient Buddhist pilgrimage is important work, the procedure to do so is often so lengthy and difficult that many people are discouraged before completing the process. Pilgrimage development at Rajgriha is an appropriate step since the Rajgriha was a dense forest even at the times of the Buddha, as the Pali literature suggests. Even during the Visit of Fahein( 5th CE), Xuanzang (7th CE) and Dharmaswamin (12th CE) the place was dense forest full of wild animals. The Revival of ancient Buddhist pilgrimage in Rajgriha would necessitate development of forest.
We now have an opportunity to focus on the ecological, social and economic values of these forest areas by considering the local communities and stakeholders in sustainable forest management when developing sites for the Buddhist pilgrimage. We are privileged to be working with Shri Rakesh Kumar, a young and dynamic Divisional Conservator of Forest for Nalanda. Shri Rakesh believes in the middle path, one that takes both an interest in sustainable forestry and in Buddhist pilgrimage revival efforts.  On 25th April 2011, we made a visit to Giriyak Hill  to visit the site and estimate necessary action at his end to let the ball rolling. Today our objective was to visit Griddhkuta area and places of antiquities around the Jivaka amrawana.
Read more- Association of Jivaka with buddha
We visited all the places mentioned by Xuanzang and the leftover of the ancient pathways which were once walked by the pilgrims since 5th BCE. Shri RakeshJi took notice of all such antiquities. it was felt that the place can be suitably developed respecting the forest laws. Few things that could be easily done is repairing the ancient pathways and developing theme parks (Forest) based on what literature says about the place. Jiivaka Amrawana area can have a Mango grove and Peacocks should be introduced in Mornivapa (As name suggests).
It was decided we meet again with a comprehensive plan to take things to next level.This is just a beginning. We hope that with his efforts, other important places in and around Rajgriha may be appropriately developed to ensure a healthy relationship between forests and pilgrims. 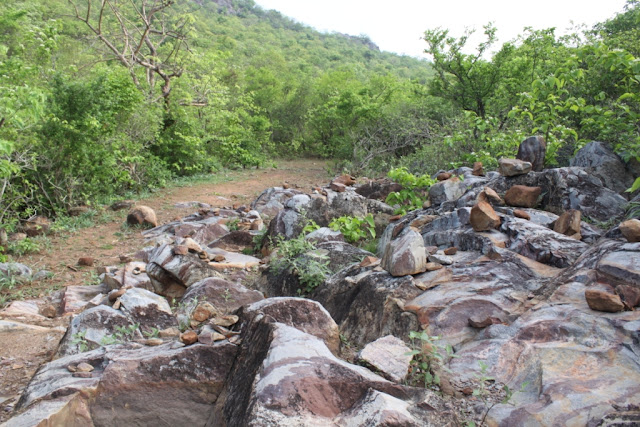 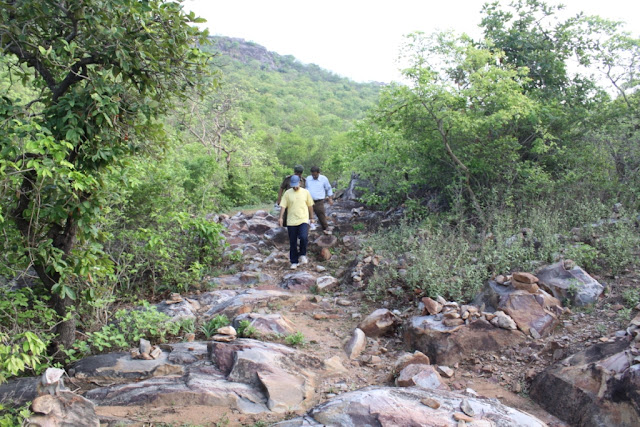