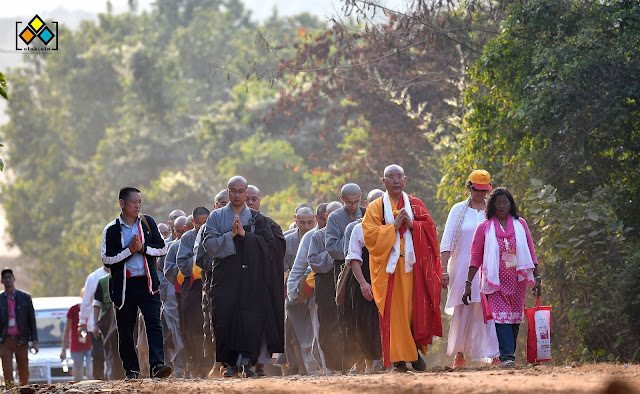 Buddhist literatures indicate that in ancient times, the sites associated with the life of Buddha were linked through well developed routes which were used by devotees to reach these sacred sites and offer prayers, perform specific rituals and recite sūtras. In other words, devotees undertook pilgrimages to sacred sites to walk in the footsteps of the Buddha and have a spiritual experience. IBC is working to revive the tradition of pilgrimage (Cetiya Cārikā) by organising Dhamma walks and chantings at these sacred sites. In this regard, in partnership with the Light of Buddha Dhamma Foundation International (LBDFI), International Buddhist Confederation (IBC) organised the 4th Dhamma Walk on 13th December, 2017 from Jeṭhian to Rājgir. The path from Jeṭhian to Rājgir described for the annual Dhamma Walk was the same route taken by the Buddha on his first visit to Rājgir following his enlightenment.

The Jeṭhian to Rājgir Dhamma Walk was held for the first time in December 2013. The walk drew widespread participation and appreciation of monks and local villagers which motivated the organisers to facilitate the walk every year thereafter. In the second year of the walk, the ancient tradition of Saṅghadāna was observed. According to Buddhist literature, when the Buddha and the Saṅgha stayed in the Jeṭhian valley, they used to go out every morning to the neighbouring villages with their alms bowl to collect their food for the day. By offering food to the Saṅgha , the villagers gained merits and the blessings of the Saṅgha . For the 2nd Dhamma Walk which was held in 2015, the villagers of Jeṭhian decided to revive this ancient tradition of Saṅghadāna. In the first Saṅghadāna, about 100 monks and nuns from different countries and Buddhist traditions went to the homes of villagers in Jeṭhian to accept food. The monks and nuns appreciated highly the kindness of the villagers while the villagers felt privileged to able to make offerings to the devotees and thereby earn merits. The success of the first Saṅghadāna drew greater participation for the second Saṅghadāna which was held in 2015 during the 3rd Dhamma Walk. The third Saṅghadāna held at this year Dhamma Walk was partly sponsored by two Buddhist practitioners from Canada, Jacques Achsen and Bob Jeffs. Based on the advice given by Jacques and Bob, the villagers very thoughtfully prepared dishes with ingredients available during Buddha’s time such as barley, rice and Bengal gram. This year’s Saṅghadāna was a beautiful ceremony like ancient times. Villagers stood at their doorsteps with food prepared in advance and served them onto the plates and bowls held out by the monks and nuns walking in a silent queue. Just as the monks and nuns were touched by the compassion and generosity of the villagers, the villagers too were moved by the grace and discipline of the monks.

After the Saṅghadāna, the monks and nuns gathered for the inaugural session of the Dhamma Walk. As in previous years, the consisted of addresses from the various organizers and important dignitaries. This year’s speakers included Dr. Dipankar Lama (Associate Professor, Nava Nalanda Mahavihara), Ms. Wangmo Dixey (Executive Secretary, LBDFI), Ven. Lama Lobzang (President, IBC), and Ven. Dhammapiya (Secretary-General, IBC) along with a few others.

Soon after the inaugural session commenced the pilgrimage walk. This year witnessed the participation of more than 1000 monks, nuns, eminent masters, laypersons, and locals from different countries, namely China, Vietnam, Korea, Sri Lanka, Japan, Thailand, Myanmar, Bhutan, Malaysia, Taiwan, Laos, Cambodia. The oldest participants were monks and nuns over eighty years of age while the youngest ones were devotees and locals under the age of twenty-five. The wide age group of participation was a clear reflection of the eagerness of devotees to have the spiritual experience of walking in the footsteps of Buddha and Master Xuanzang. The high-spiritedness of the devotees was also evident from the constant chanting as well as silent praying that went on as long as the walk lasted. The local villagers happily assisted the participants in completing the 15 km walk by supplying water throughout the walking trail and looking after those who fell behind others. The day ended for the participants at Veḷuvana (Bamboo Grove) in Rājgir where they thanked by organisers for their enthusiasm and energy. The Dhamma Walk was an extraordinary display of the synthesis of the energy of local villagers and devotion of monks and nuns.

December 2017 marked the fourth time of the holding of the Dhamma Walk. The successful organising of the walk for four consecutive years is a commendable feat given the extent of arrangements that have to be made at the village of Jeṭhian and along the Jeṭhian- Rājgir walking trail and the level of communication and coordination required between organisers, government officials, local villagers and participating monks and nuns.

On behalf of the organisers of the Dhamma Walk, I thank  Shri G C Bhuyan, Director, India Tourism, Ministry of Tourism, Government of India for sponsoring 1000 caps for the participants of the Dhamma Walk. I specially want to mention that Ms. M. Manimekalai, Principal, Jawahar Navodaya Vidyalaya, Jeṭhian was constantly in touch, enquiring if we needed any help.  The mobile medical unit from Civil Hospital, Rājgir did a wonderful job by following the Walk. Last but not the least; I would like to thank the men, women and children of Jeṭhian, who volunteered their time to help make this event enjoyable. 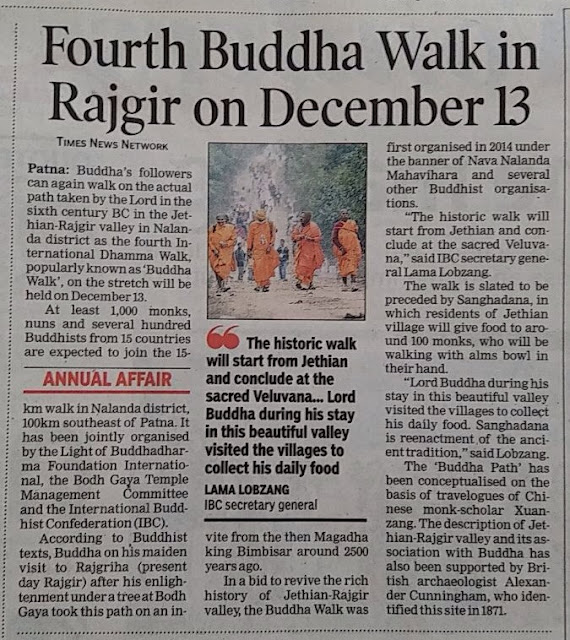 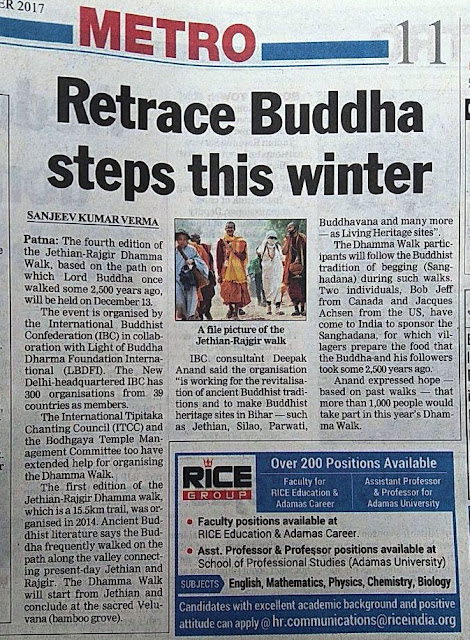 The Starting of a Journey to Rediscover the Roots of Mahāyanā Sūtras: The first ever Mahāyāna Chanting Ceremony held in Rājgir


In ancient times, chanting of sūtras delivered by the Buddha constituted the core activity of the daily life of Buddhist monks and nuns. Chanting was not only a means of recording and remembering the sacred words of the Buddha, it was also a way of fostering unity and brotherhood among the community of monks and nuns. While the tradition of chanting is not completely lost in modern times, it is for the most part restricted to monastic life. Chanting of sūtras by monks and nuns in the open air and in the presence of lay persons is exceptionally rare today. International Buddhist Confederation (IBC) and the Light of the Buddha Dhamma Foundation International (LBDFI) is trying to revive the ancient Mahāyāna tradition of chanting. In this light, both the organisations organised the 1st Mahāyāna Chanting Ceremony from 14-17th December 2017 at Rājgir - the site where Buddha delivered several important sūtras.

The 1st Mahāyāna Chanting Ceremony brought together monks, nuns, eminent masters, and scholars from six countries namely China, Japan, Korea, Vietnam, Nepal, and India. The four-day event opened with a chanting session at Griddhakūṭa hill (Vulture’s Peak). Griddhakūṭa hill is a very sacred place for Buddhists for several reasons. It was one of the favourite places of Buddha and during his stay at Rājagriha, Buddha often came here to preach Dhamma to his Saṅgha. According to Pali literature Buddha also delivered many important Sutta-s at Griddhakūṭa such as Atanatiya Sutta, Bhikkhu-aparihaniya Sutta, Daruka-khandha Sutta, and Dighanaka Sutta. However, the most important event associated with Griddhakūṭa hill is when Buddha after his Enlightenment set forth the Second Turning of the Wheel of Dhamma to an assembly of monks, nuns, laity and innumerable bodhisattvas. The Prajñāpāramitā-Sūtra-s (Perfection of Wisdom Sūtra-s) (Beal 1914: 114), the Saddharma-Puṇḍarīka Sūtra (Lotus Sūtra), Sūrāngamasamādhi Sūtra (Beal 2005: 116), Lalitavistra Sūtra and the Bhadrakalpikā Sūtra all are considered second turning teachings delivered here. The merits that the Saddharma-Puṇḍarika Sūtra hold for the Mahāyāna followers is evident from the fact that a big stūpa was erected at the site where Buddha delivered the sūtra at Griddhakūṭa Peak (Beal 1969). The recitation of sūtras at Griddhakūṭa on the first day of the Chanting Ceremony was not only a surreal spectacle but also a deeply spiritual experience for both who were reciting and who were listening to the sūtras.


The second and the third days of the Chanting Ceremony were held in the open air auditorium of the Rājgir Convention Centre, set amidst rocky hills and serene gardens. From morning until late afternoon, monks and nuns from the different participating countries chanted the sutras in their respective languages often accompanied with beats from their traditional instruments. Such multilingual chanting not only represents cultural interaction and mutual respect but, more importantly, unity of peoples and nations.

The evening time of the second and third days of the Chanting Ceremony were dedicated to cultural performances by groups from China and India. These performances were a display of the cultural diversity between China and India in terms of dance and music. At the same time, by bringing talents from both counties on a common space to celebrate the transcendental beauty and appeal of dance and music, the cultural performances also reflected the friendship between India and China.


The Chanting Ceremony was brought to a close on the fourth day through a valedictory session held at the remains of the ancient Nālandā University. The ancient university at Nālandā was one of the most prominent Mahāyāna monasteries in the first millennium where monks from China, Japan and Korea visited to collect and practice the true teachings of Buddha. In this way, Nālandā was one of the greatest seats of Buddhist learning and practice in ancient times. With this in mind, the remains of the ancient Nālandā University was aptly chosen as the venue for the closing session of the beautiful journey of returning to the roots of the Mahāyāna sūtras. The valedictory session constituted of remarks by one representative of each of the participating countries. At the end of the valedictory session, all the monks and nuns made special offerings at Temple no. 3 which according to Chinese and Korean literature is Mūlagandhakuṭī — the place where the Buddha spent one of his rainy season retreat. As documented in Pali literature, the Buddha visited Nālandā many times and delivered some of the very important sermons.
The four-day Mahāyāna chanting ceremony is an unprecedented event. By reciting the sūtras collectively, participants from different countries showed their resolve to strengthen Buddha Dhamma (Dharma) in the land of its origin and promote the cultural oneness of these countries symbolised by the Buddhist faith. The event attracted the participants to the sacred heritage sites of Rāgjir and its surroundings, namely Silāo, Pārwati, Nālandā, Jeṭhian, and Buddhavana, thereby highlighting further the sacredness of these sites. The ceremony also showed the eagerness of participants to bring about cultural exchange and revive friendship between their respective countries. Finally, this event paved the way for further cooperation between India and China for cultural exchange and mutual learning. IBC and LBDFI hope that they are able to organise more chanting ceremonies in the coming year and elicit greater participation to continue the cultural interaction and friendship between India and the Buddhist countries of East Asia.

LBDFI and IBC together plan to revive these traditions and make these heritage sites into living heritage. LBDFI and IBC plan to extend the chanting programme to a few more sites in the neighbourhood of Rājgir such as Silāo — the place where Buddha exchanged robes with Mahākassapa. The ‘Exchange of Robes’ is an important event in Buddhist traditions, and yet Silāo is a very neglected site. Chanting of sūtras at Silāo would help not only in making the site as living heritage and bring it on the Buddhist pilgrimage map. The monks who participated in the Mahāyāna chanting ceremony at Rājgir resolved to also organise a special prayer ceremony for Xuanzang next year onwards.

Some newspaper clippings from the Event 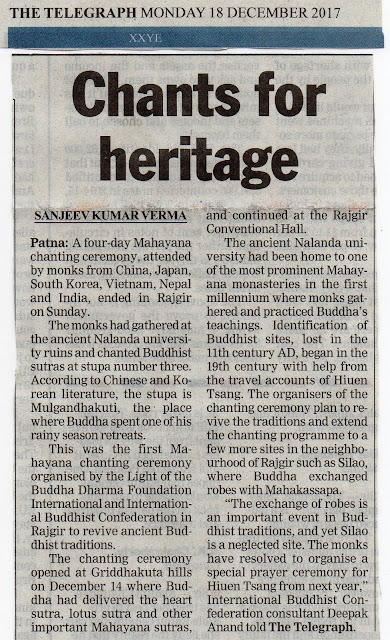 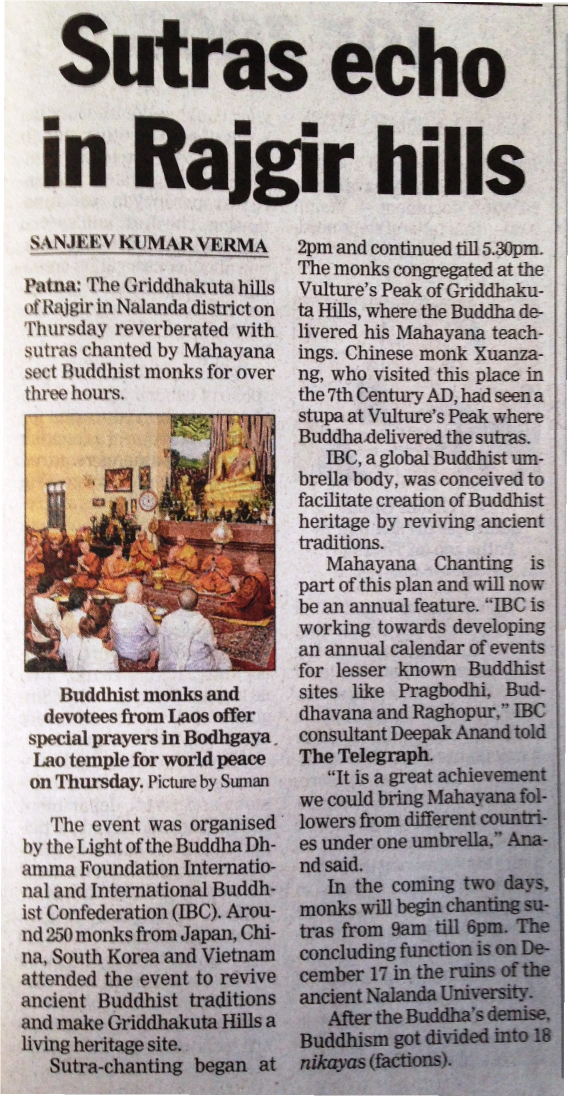