Xuanzang is not a familiar name in the school history books so the first time I heard it, it rang a bell. I was intrigued to find more because all of facts related to Buddha in Nalanda and vicinity were cross referenced with Xuan Zang’s travelogue.

Being a traveler myself and having experienced many cultures I wanted to know more about the Chinese scholar who travelled to India via the silk route. My first detailed encounter with Xuan Zang was these travel guide maps that were developed as a part of the Explore Rural India project, when Deepak asked me to edit some of the passages.


XuanZang traveled through various important sites related to Buddha and Buddha’s teachings several centuries after Buddha’s parinirvana and wrote extensively about them in his travelogue. After the 12 century Turk invasion when all the visible sign of Buddhism were obliterated from Magadha region, there was no way to even confirm that the roots of Buddhism lay buried deep in this landscape. The original structures were either buried in layers of soil or surrounded with local legends, the bricks and pillars were used to support new structure and the teachings lived through festivals and traditions among the people here. It was then Xuanzang’s travelogue that came to the rescue of the early Orientalists who tried to solve this puzzle.
Soon after I was introduced to XuanZang’s history, I got the opportunity to tour the sites of Nalanda that were mentioned in travel brochure and I was thrilled to see what was left and enthralled to imagine what must have been. Deepak and I discussed the possibilities and ways to share this heritage and knowledge with those who might be interested but are unaware. Out of the continued discussions were generated many ideas about how the information that we have can be shared, preserved and most important of all be beneficial to the community that lives with these treasures.
Some of these ideas have already sown the seeds and you have read about them on this blog; others are still in the making. The Nalanda (Nalanda-insatiable in offerings & Nalanda on the move) blogs were our way of sharing the history and our progress while keeping tabs on our goals and ultimate destination.
While on the excursion to Nalanda, I visited the Xuanzang Memorial and Museum, which is built a short distance away from the Nalanda University ruins. The building and its inspiration both come with a very interesting history, and I (along with the rest of the team) get to share it with you.
We are excited and humbled as we share this book with you. A book that began with a casual conversation and was carried forth with much enthusiasm and passion, to explain to the visitors of Xuanzang Museum who ‘Xuanzang’ really was and how much he contributed to our history.

Once the idea of the book sunk in, Deepak came up with the basic set up about how to best share the complete story without losing the interest of the reader and segregated the information into chapters and visuals. While Deepak poured over the facts about Xuan Zang’s journey, the path he took and the time and hurdles he passed and other important events of the journey, I worked on the details about Xuanzang’s life history, his motivation to travel to India and then the reasons he chose to write his travelogue. During this time, Dr. Pant who is the director of Nav Nalanda Mahavihar acted as our anchor; he made sure I don’t take many writers’ liberties over the hard core fact and closely guided Deepak as he developed the exact route maps and the timelines. We discussed the Architectural details of the structure and how it has been inspired from Chinese architecture which in turn in some situations was an adaptation of Indian structures of the time. We all worked in close collaboration and went around circles many times and churned out a concise book about Xuanzang, who he was, what inspired him and how his contributions added to the spread to Buddhism, not only in China but other South East Asian countries including India. The route maps in the book are one a kind and have been created with great precision and thorough research.

Although working on a project like this with our team, two members that are 8000 miles and 11 hours apart and the third one who bears the responsibility of an entire university and travels frequently, was very challenging but getting the final product to print was whole another saga. Here’s the rest of the team:

A big pat on our backs for all the hard work and most importantly the great teamwork.

There were as many iteration if not more for the format of the book as there were for the original content, but in the end it is what we wanted, a book that is within reach of every visitor that come to see Xuanzang Memorial. Or perhaps one would find a copy and would be inspired to visit and pay a tribute.
It was released in a small ceremony by the current honorable Governor of Bihar ‘H E Debonand Konwar’ on the 25th September in Patna. The day in pictures follows: 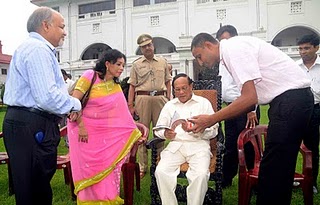 "A Journey through Bihar to Vihara" and the Heritage Leaders

Heritage is a tie that binds and it is a resource from which we all profit, whether spiritually as a document of the richness of our faith; or culturally, as a testament to the stories and traditions that we share. The Buddhist Remains of Bihar is spread across in its villages and most of the time the community of the village is unaware of its social and economical value. Tangible and intangible cultural heritage of Bihar can provide economic benefit while reinforcing the common identity of the community and strengthening socio-economic aspirations.
The creation of sensitivity, awareness of cultural heritage and attachment is not something that can be developed with short-term efforts. This requires sustained and focused efforts that can persist for a generation. Nava Nalanda Mahavihara Sanskritik Gram (NNMSG), the Patipatti arm of Nava Nalanda Mahavihara is conceptualised for sustained efforts in the field of Community-Heritage interface there by promoting "Engaged Buddhism". In past we have organised thematic exhibitions featuring various aspects of the Buddhist heritage of Bihar. In continuity of the past efforts NNMSG is organising an exhibition titled “A Journey through Bihar to Vihara”. The focus of the Exhibition is on the footprints of the Buddha Cārikā and its dynamics with the local community.

Bihar in general and Magadha in particular is a repository of tangible and intangible Buddhist heritage, with this exhibition we unfold to interact with the stakeholders. Objective is to instill a sense of pride among the community about the existence of tangible and intangible heritage in their vicinity. We also want to reach those who support the preservation of cultural heritage in this region so that we can plan the roadmap which will enable us to jointly envision and ensure a future for the cultural heritage of Bihar. 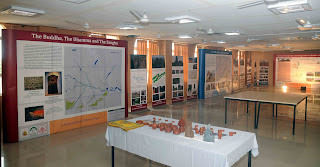 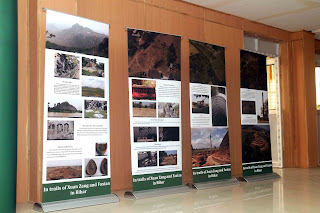 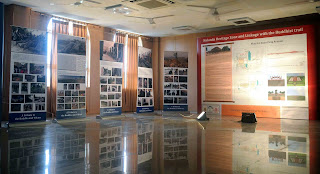 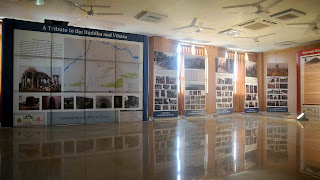 Heritage leaders from 40 odd villages participated in the "Engaged Buddhism" Workshop on occasion of World Tourism Day on 27th Sept. 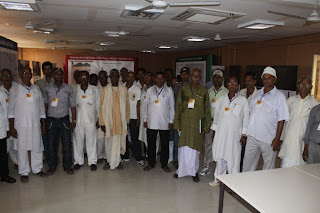 Sanghassa Patiţţhāpako Mahā Kassapa Yāvajīvam Sammānopādhi
About the Honour
Community involvement for the heritage management is the theme of Nava Nalanda Mahavihara Sanskritik Gram (NNMSG). And an important component of heritage management is protection of the heritage. The advocacy and efforts of individuals and village level institutions for the protection and preservation of the Buddhist Remains should be encouraged and appreciated. In the past, NNMSG has acknowledged the contributions of Heritage Leaders from the neighbouring villages of Nalanda. The RABPB Project in Collaboration with Bodhgaya Temple Management Committee (BTMC), Department of Buddhist Studies (Nava Nalanda Mahavihara) and NNMSG proposes to take this acknowledgement to a next level by instituting an award in the honour of Venerable Mahā Kassapa, whose contributions to the Buddha, the Dhamma and the Sangha is beyond words.

Contributions of Shri Ram Pukar Singh
Shri Ram Pukar Singh Ji was born in 1923 in Chechar. He actively participated in Indian Freedom Struggle and spent one year in Muzzafarpur Jail on sedition charges in 1942.
In 1975, Shri Subramaniam a close associate of 2nd President of India Dr. S. Radhakrishnan visited Shri Ram Pukar Singh Ji looking for the “Ananda Stupa” following the travelogues of Xuanzang.
Shri Subramaniam felt that the Chechar should be the place of the “Ananda Stupa”.  Together they visited around eight stupa mounds in vicinity of Chechar.
His meeting with Shri Subramaniam exposed him to the historic value of the place. This realization made him aware of his responsibilities. The Heritage of Chechar had many dimensions but the most demanding issue that required immediate attention was safeguarding the antiquities scattered all around the Chechar. Chechar and its surroundings has a long mound that runs parallel to the river Ganges and annual floods washes off the mound exposing precious antiquities.
It was an enormous task, walking miles for days along the Chechar coastline collecting antiquities from the layers of sand. The task was coupled with convincing people to donate their collections and not to sale it to spurious traders. He worked tirelessly understanding the rich past of the place and then educating the community, instilling a sense of pride among them towards legacy of Chechar.
Another important task was generating awareness among the wider world and other stakeholders. In 1976, Shri Ram Pukar Singh met the then Prime Minister Smt. Indira Gandhi. He carried some antiquities from his collection to show her. Prime Minister Smt Gandhi got highly impressed with what she saw and what she was informed by him. She immediately asked authorities to conduct exploration and excavations at Chechar.
In 1977, Archaeological Survey of India conducted exploration followed by excavations in 1978. The excavation opened many hidden treasures in the Indian archaeology and history. True to Shri Rampukar Ji’s expectations the finds of Chechar brought Chechar on Archaeological Map of the world.  Smt Gandhi in her visit to Bihar met Shri Ram Pukar Singh Ji and discussed the progress.
His next mission was to get a museum for antiquities of Chechar at Chechar. With support from local Member of Parliament Shri Ram Vilash Paswan a museum was constructed at place. This museum receives many national and international visitors, patrons of antiquities and followers of the teachings of the Buddha annually.
Shri Ram Pukar Singh Ji is also making consistent efforts to safeguard and secure the stupa mounds in Chechar and around and one among them which he believes is “Anand Stupa” at village Madurapur near Chechar. He understands how important it is to preserve the “Ananda Stupa”, for the revival and development of ancient Buddhist Pilgrimage walked by Fahein (5th CE) and Xuanzang (7th CE).
Now Shri Ram Pukar Singh Ji is in his late 80’s, lost his eyesight, partially deaf but still he is working tirelessly to share his passion and pride for Chechar with the countless people who visit him.
Sharing a glimpse of the awareness work done through News Papers and Letters by Shri Ram Pukar Singh Ji since 1976. 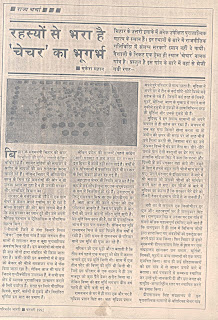 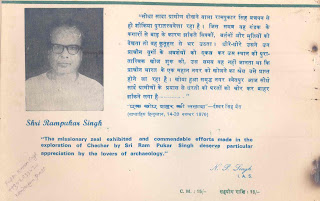 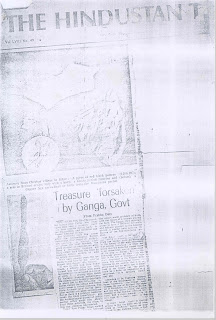 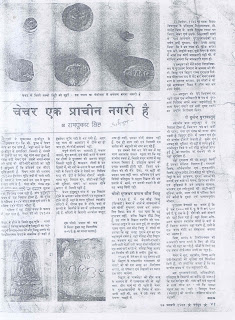 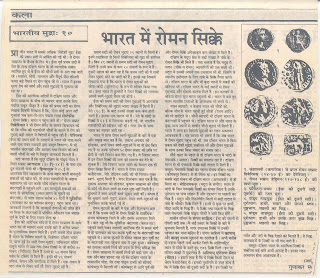 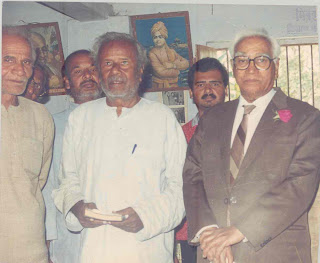 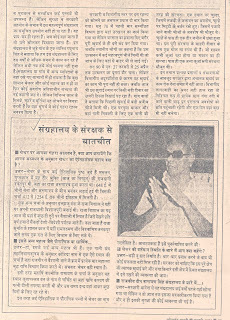 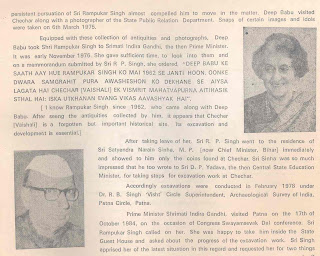 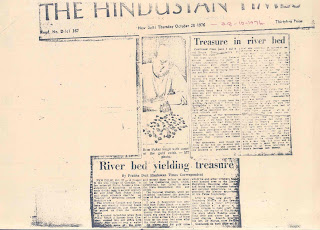 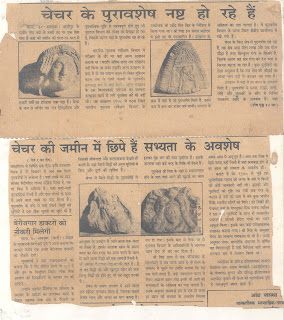 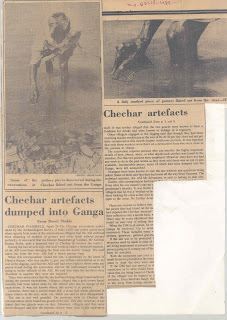 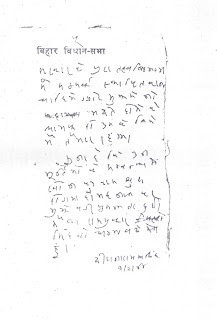 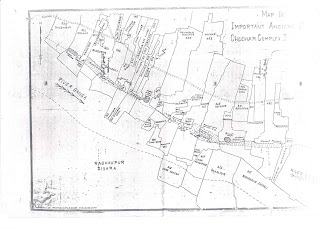 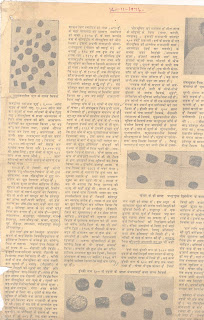 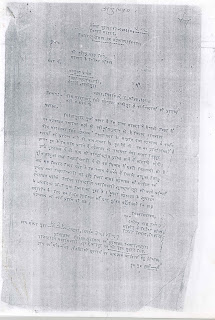 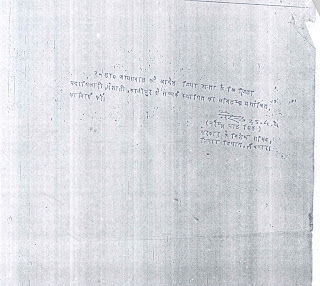