The plight of handloom weavers across the country is apparent and it is worsening every day. In the 1990s power looms became increasingly common, producing many times more product than handlooms, which can take months to produce specially designed woven fabrics thread by thread
Chinese products of finished fabrics with synthetic yarns have further aggravated the situation.  Many macro- and micro- social and economical issues have complicated the process and thousands of handlooms in the Nalanda district alone have fallen silent.
In spite of these limitations, there are some rays of hope; efforts by individuals and organizations to promote handloom work that keeps the hope alive. If you visit Baswanbigha and Nepura in the Nalanda district, you can still hear the harmonic and rhythmic picking sound of a fly shuttle in the lanes of these villages. Efforts to upgrade the skills of the weavers and introduce new designs were made by the late Shri Upendra Maharathi. Now his daughter, Smt. Mahasweta Maharathi, is following in his footsteps. She feels that handloom products from India enjoy an international reputation with a good demand in the international market. She has impressed upon the weavers the need to develop new designs and patterns based on the ancient motifs of this land.
Select weavers of Nepura and Baswanbigha are currently engaged in producing fabrics based on traditional Baavanbutti pattern of weaves. I had an opportunity to talk to one such weaver in Nepura, Shri Akhilesh Kumar. He is so proud to be associated with this initiative and proudly showed us a newspaper article in which his woven Baavanbuti fabric was offered to His Holiness the Dalai Lama on the occasion of the inauguration of the Buddha Smiriti Uddhyan (Buddha Memorial Park) in Patna. Akhilesh expressed continued interest in learning new patterns of designs and said that he is grateful to the team of Maha Sweta Maharathi ji for giving him this opportunity. 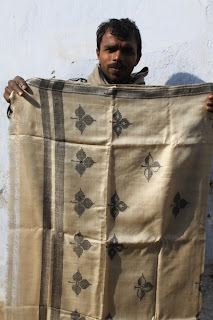 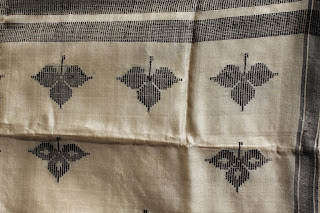 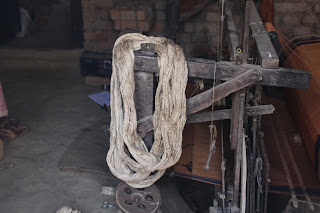 Nepura is known for its Tussar Silk handloom weaving and I have worked with the weavers group here.  At Nepura, generally the whole family is involved in the weaving process. Most of the preparatory work like bleaching, opening of the cocoon for the silk, stretching and winding,  etc. are done by the women and children and weaving on the looms are done by the men, although one woman has learned this trade, too.
Posted by Deepak Anand at 8:47:00 PM

Nice post! The work part of the sari is good. Thanks for sharing!!

Very nice post, If you are looking for some trendy women's ,men's and kid's online boutique with a multitude of styles and fits, colors then you may visit https://www.jignov.com/women/ethnic-wears/lehenga-choli.html which providing the largest online ethnic wear outfits.