There is some good news from village Beswak in Nalanda district. With the efforts of Shri Dinanand Pandey, an ancient mound in Beswak has now been protected by constructing a boundary wall around the mound. In the Magadha region of Bihar, there are hundreds of villages that are settled over ancient remains. Beswak is one such village. Antiquities are spread throughout this village suggesting that it was an important Buddhist centre in the past. There are many ancient sculptures of Buddha and Hindu deities scattered all around. There are many prominent mounds with the biggest one at the centre of the village spreading more than 2.5 acres and averaging 15 ft in height. In recent years this mound has been a target of land grabbers.

Shri Dinanath Pandey understands the need to protect the mound, and is therefore generating awareness among fellow villagers. He has taken the matter also to the government officials concerned. Shri Pandey’s efforts paid off finally when he got to meet the officials of the Archaeological Directorate, Department of Art, Culture and Youth (DACY), and officials in the District administration. In 2015, DACY allocated 54 lacs INR for making a boundary wall around the mound. Harsh Ranjan Kumar, a Senior Technical Assistant in DACY, played a very important role in convincing the department officials of the need to safeguard this prominent mound.

Beswak is situated 50 kms south of Patna, the capital of Bihar, and 35 kms south-west of Bihar Sharif, headquarters of Nalanda District. Beswak has many ancient sculptures lying unprotected under the open sky.  According to Pandey ji and other villagers, the village collective of ancient sculptures that had numerous sculptures until a few years ago has now only few broken fragments. Pandey ji is aware of the importance of getting these remaining sculptures secured. He is trying to persuade fellow villagers to create a small museum with the help of contributions from villagers.

There are more than 500 villages in Magadha that has ancient remains in the form of mounds and sculptures. It is practically impossible for the government to protect the mounds in all the villages. There is an urgent need to create awareness among villagers about the significance of these mounds and the necessity to protect them. 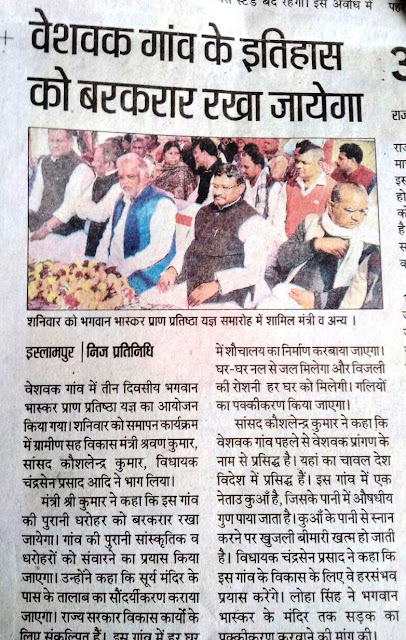 Thanks to Aparajita Goswami
Posted by Deepak Anand at 4:41:00 PM 0 comments