Dev Nī Morī Relics: From Museum to its Find Spot

On 19 August 2017, I had the opportunity of accompanying Ven. Lama Lobzang (Lama Ji), Secretary General of International Buddhist Confederation (IBC), on a visit to the ancient Buddhist site of Dev Nī Morī near Shamlaji in Gujarat. Archaeological excavation in this scenic valley in 1962 had led to the discovery of body relics of Buddha. Those relics are currently kept at the MS University in Baroda under lock and key. Buddhists venerate the relics of Buddha as sacred objects. According to Buddhist tradition, the rightful place for the exposition of the relics of the Buddha is the stūpa. The Government of Gujarat has now decided to bring out the body relics of Buddha from the closets of the museum and re-enshrine them at their find spot. This is welcome news.

After a two hour drive from Gandhinagar we reached Dev Nī Morī. The place is now a large water reservoir (lake) and the ancient Buddhist remains discovered near the village Dev Nī Morī lie submerged under the lake. Local volunteers at the dam site pointed out to us a Buddhist flag hoisted on a vertical pole in the centre of lake believed to be the site of the stūpa where the holy relics of Buddha were discovered in 1962.

Ven. Lama ji requested the dam management to allow us to offer prayers at the spot where the relics were discovered. The dam officials not only agreed but were also kind enough to offer their motor-boat to take us to that spot in the centre of lake.

An ancient custom in India is to circle around a person of reverence or a holy object (stūpa, temple etc), keeping the person or the object on the right side. This is called ‘padakkhina’ (Sanskrit: ‘pradaksina’). Ven Lama ji requested the motorboat operator to circle around the pole to be able offer prayers as per this custom and chant Buddhist sūtras. Lama ji also wrapped a Khadda (Buddhist scarf) on the pole installed at the spot of the submerged stūpa.

Lama Ji felt nostalgic and shared with me how Dev Nī Morī relic project was conceived during his meeting with the then Chief Minister of Gujarat, Shri Narendra Modi ji at the latter’s office in Gandhinagar on 20 February 2013. To realise the project, the government of Gujarat signed a Memorandum of Understanding (MoU) with IBC on 12 January 2015, and formed a Working Committee on 8 June 2015. The Committee has met several times since its formation. The project was also discussed with H.H. Dalai Lama on 19 March 2015. Further, at the ‘Global   Hindu-Buddhism Initiative,’ an International event jointly organised by IBC and Vivekanand International Foundation (VIF) on 5 September 2015 at Bodhgaya, the architect Shri Ojas Hirani and officials of the Gujarat Pavitra Yatradham Vikas Board (GPYVB) made a presentation to Shri Narendra Modi, Hon’ble Prime Minister on the holistic development of Dev Nī Morī. The delegates present at this event including more than 400 eminent monks from 26 nations appreciated the Project highly.

Name of the place

The remains of many Vihāra-s and extensive litter of brickbats and potsherds indicate that the archaeological site of Dev Nī Morī was a hub of Buddhist activity spread over a wide area. It appears that even after these Buddhist monasteries were abandoned at the end of 1st millennia, the sacredness of the place persisted. Because of the sacredness associated with the place, the population that settled around these monastic remains in later centuries named this area ‘Dev Nī Morī’. The name ‘Dev Nī Morī’ has multiple interpretations because the word ‘Morī’ has many meanings like ‘in Front of’ or ‘a Collective’ or ‘a Drain’. Therefore, Dev Nī Morī could mean ‘In front of God’ or ‘Collective of God.’ Since the River Meshwo flowed by the monastic remains, the name Dev Nī Morī could also mean ‘Drain belonging to God’.

Discovery of the site and construction of the reservoir

The ancient Buddhist site of Dev Nī Morī was situated in a 16 km long and 2 km wide, bowl-shaped valley surrounded by hills on four sides. These hills, called Danta Hills, are part of the Arawali Mountain range. River Meshwo, a tributary of River Sabarmati, enters this valley from a narrow pass on the northern side and drains out through a 150 metre-wide ridge on the western side of the valley. Shamalaji is drought prone region. As a result, in the mid-1950s, the government of Gujarat planned to construct a medium-scale dam in this region for the purpose of irrigation. Engineers involved in the planning of the dam found the bowl-shaped valley of Dev Nī Morī as the most suited site for collecting the water by constructing a dam at the point where the river drains out of the valley i.e. on the 150 metres wide ridge on the western side of the valley. Archaeological exploration by Shri P A Inamdar in 1936 and later by Dr. H Goetz and Dr. U P Shah reported the existence of a lot of archaeological remains in this valley. Irrigation department requested the concerned government authorities to conduct excavation and documentation of the archaeological remains before the construction of the water reservoir. Six   villages in the valley including the village of Dev Nī Morī were relocated in the process of construction of the water reservoir.

Excavations and discovery of the Buddha Relics

The excavations at the archaeological site of Dev Nī Morī were conducted by Prof. B. Subbarao, Dr. R. N Mehta and Shri S. N Choudhary of the Department of Archaeology and Ancient History of the Maharaja Sayajirao University of Baroda from 1959 to 1963. The excavations revealed the remains of a big Mahāyāna Buddhist Stūpa and Vihāra-s belonging to early centuries of Common Era. The highlight of the excavations was the discovery of a circular reliquary casket from 120 feet wide and 40 feet high canonical stūpa mound known locally as ‘Bhojrajā no Tekro’ meaning ‘Hillock of King Bhoj’. The relic casket of stone bore an inscription reading ‘dashabala sharira nilay,’ in other words ‘the abode of the Body Relic of the Buddha’. The main body of the casket bears an inscription which records an account of the construction of the stūpa and the installation of the Buddha relic casket there. It indicates that the Mahāstūpa (great stūpa) was erected during the reign of King Sri Rudrasena on the 5th day of bhāḍrapada in the year 127 of the Kathika Kings (i.e. 206 century CE). Following the Mahāparinirvāṇa of the Buddha in the 6th century BCE, his body was cremated and its ashes were divided into eight parts which were then preserved as holy Relics in eight śarīra stūpas (constructed over the Buddha’s relics). As mentioned in Aśokāvadāna, King Aśoka (3rd century BCE) who ruled from Pāṭaliputra collected the Buddha’s śarīra from seven droṇa stūpa (seven of the original eight stūpas constructed over the Buddha’s śarīra) and enshrined it in 84,000 stūpas throughout his realm of Jambudvīpa (Indian Subcontinent). Archaeological and circumstantial evidence suggest that many kings in the Indian Subcontinent reopened the Buddha relic stūpas made by Aśoka and redistributed the body relics of the Buddha. The Dev Nī Morī relic of the Buddha is probably one such Buddha relic that was enshrined by the King Rudrasena (probably from the Kushana dynasty). As mentioned in Buddhist literatures including the travelogues of the 7th century CE Chinese monk-scholar Xuanzang, this region of Vaḍnagar had hundreds of flourishing Buddhist monasteries. This has been corroborated with the excavation and exploration in this region done by the team of excavators from MS University who excavated the Relic stūpa.

Importance of the Buddha Śarira (body relics) to the Buddhist World
Relics have been a focus of veneration for the Buddhist since, it would seem, the passing of the historical Buddha himself. As mentioned in Mahāparinibbana Sutta (Chinese: Nièpán Jīng; 3 Japanese: Nehankyō; Tibetan: myang ‘das kyi mdo), on the final journey to Kuśīnagara to attain Mahāparinirvāṇa, Buddha asked his followers to erect stūpas over his remains and also endorsed the worship of these holy edifices. This is believed to be the origin of the practice of building stūpas at which lay followers could pay homage and earn good karma-s. Archaeological investigation at reliquary sites such as Vaiśālī and Piprāhwā has confirmed that the practice of relic veneration existed prior to the time of the Aśoka. The Sanskrit version of the Mahāparinirvāṇa Sūtra refers to the Buddha’s remains as Asṭhi and specifies that they are collected and placed in a golden urn. These reliquaries were often placed in larger receptacles and nesting receptacles made of gold and precious metal which in turn were put inside stūpas. In symbolic terms, when a king constructed stūpas to house relics, he and his kingdom became a kind of living reliquary. In the 1st millennium, with the gradual spread of Buddhism, the body relics of the Buddha were carried throughout the Asian subcontinent. Imperial patronage of relic veneration in China, Sri Lanka, and other areas of Asia constituted both a demonstration of the largess of the ruler and a response to the fervour of local Buddhists.

Throughout his travel in the India subcontinent, Chinese monk-scholars Faxian (5th century CE) and Xuanzang (7th century CE) witnessed how the presence of Buddha’s relics attracted devotees and strengthened their belief in the Buddha’s historical existence. Many of the relics were also thought to possess miraculous power. Xuanzang noted that a large number of pilgrims and local people paid homage to these relics showing they had deep faith in the miracle-working power of these relics.

The decision of the government of Gujarat to bring out and enshrine the Dev Nī Morī relics is a historical move to preserve and promote the relics of the Buddha as per the wishes of Buddha recorded in the Mahāparinibbana Sutta. The Project for exposition of the relics in the stūpa — at the very place where they were discovered — rather than keeping them in the museum has made Gujarat the first state in the country in enshrining Buddha’s relics in their rightful place. Taking inspiration from the Gujarat government, I believe that the government authorities in Bhattiprolu, Vaishali, Sopara, Nagarjunakonda, Lalitagiri and others places which contain body relics of the Buddha should also enshrine the relics in their find spots. 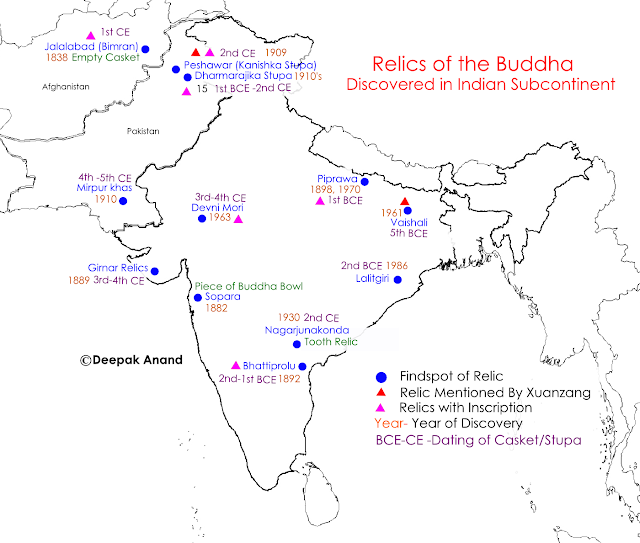 Special Thanks to Aparajita Goswami
Posted by Deepak Anand at 8:29:00 AM

Great compilation of information. rich text and fantastic use of maps.Was a delight !

Nice post! Kushinagar is a very ancient and historical place in Uttar Pradesh of India. It is famous place named of Lord Buddha. There are very beautiful Buddhist Temple So, attracts for tourism. You can find more - Best restaurants in Kushi Nagar | Temple in Kushinagar | places in Kushinagar.

Amazing information has been put into the post. This shows that you are not only one of the dedicated few, but also one of the enlightened few, about this priceless heritage of ours.

Keep up the priceless work.