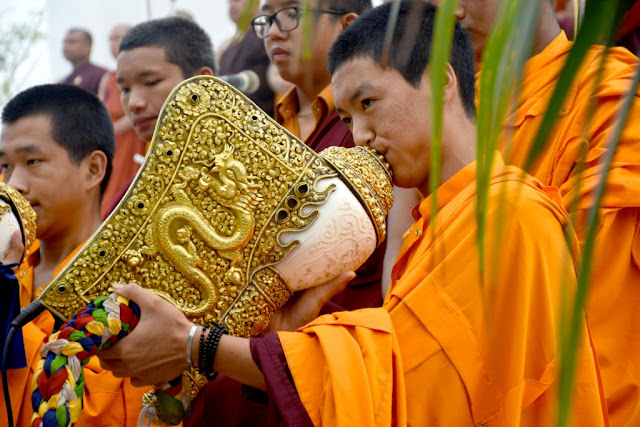 I got a wonderful opportunity to participate in an early morning chanting of the Buddhist sūtras and offering of prayers at the Aśokan Rock Edicts site of Dhauli. Dhauli Hills are located on the banks of the river Dayā, 8 km south of Bhubaneswar (capital of Odhisa). The event was organized by Department of Tourism, Government of Odhisa on 12th April, 2017.  More than 100 venerable monks and nuns from Sri Lanka, Myanmar, Thailand, Cambodia, Vietnam, Tibet, Korea, Laos, Bangladesh and India participated in this auspicious event.  Dhauli has a very special place in the history of Buddhism. It was here the 3rd Mauryan Emperor Aśoka (3rd BCE) in his eighth regnal year (RE-13) fought the Kalinga war that transformed and motivated him to follow the teachings of the Buddha and establish ‘Dhamma Practice’ (RE-IV).
Pictures from the chanting at the World Peace Pagoda, Dhauli 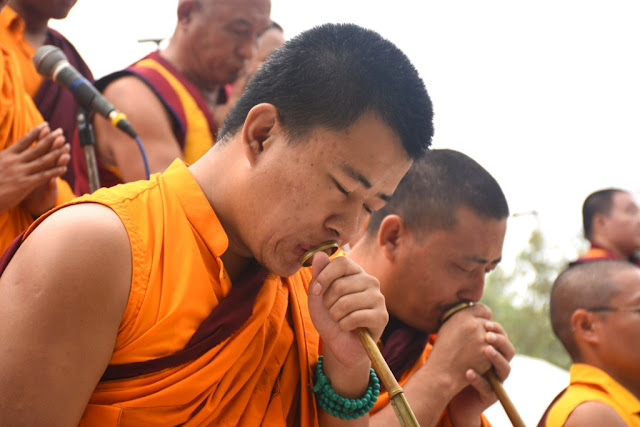 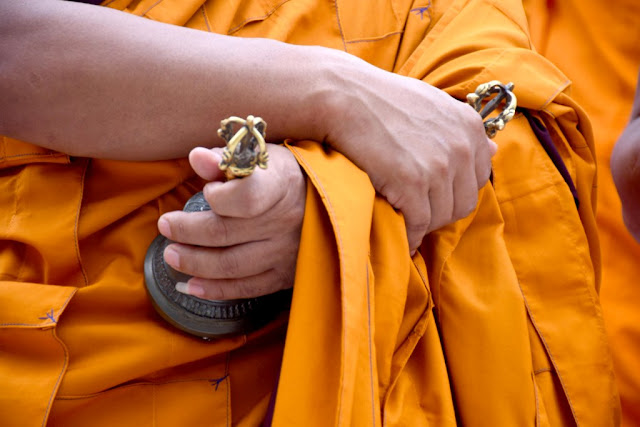 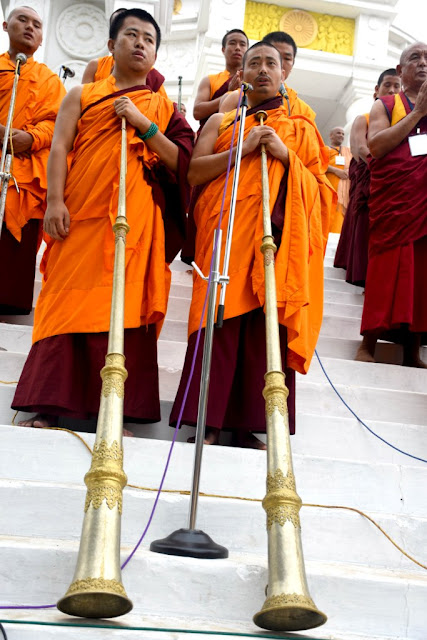 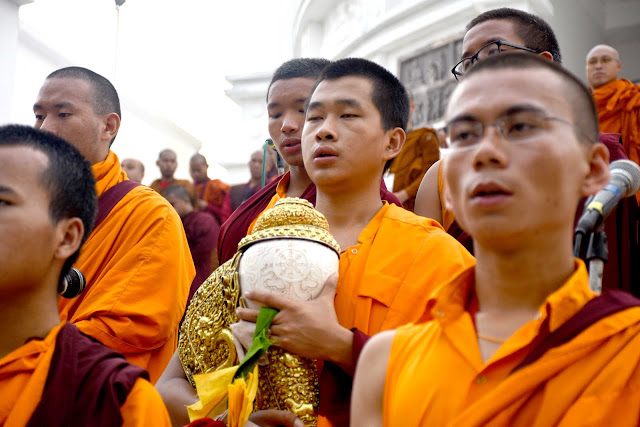 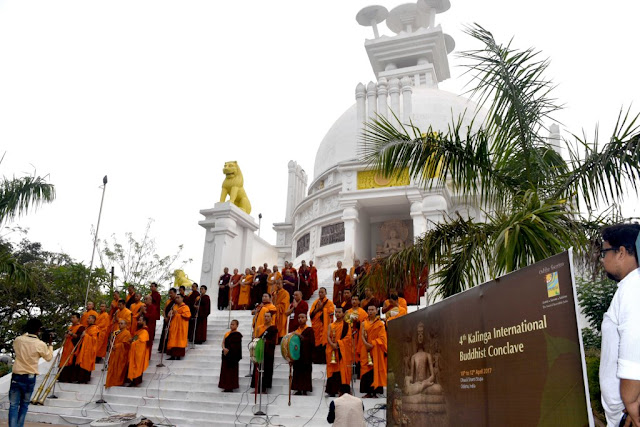 In 3rd BCE, Mauryan dynasty ruled whole of Indian subcontinent baring a few kingdoms like the Kalinga. With many sea ports on her coast, Kalinga was a maritime power with oversee colonies. King of Kalinga, according to Greek ambassador Megasthenes who lived in the court of the first Maurya Emperor Chandragupta Maurya, maintained for himself a standing bodyguard of ‘60,000 foot soldiers, 1,000 horsemen, and 700 elephants.’  In 269 BCE, Aśoka became the emperor of Magadha Empire. Aśoka sent a letter to Anantha Padmanabha, the King of Kalinga where Aśoka asked for complete submission of Kalinga to the Mauryan Empire. This was refused by the king of Kalinga. The deciding battle was fought on the banks of river Dayā near Dhauli hill. From the side of Kalinga, it was truly a people’s war. The freedom loving people of Kalinga offered a stiff resistance to the Mauryan army.  The battle was fierce and claimed the lives of 150,000 warriors of Kalinga and 100,000 Mauryan warriors.


The scene of the war presented a horrible sight, the whole terrain was covered with the corpses of soldiers, wounded soldiers groaned in severe pain, vultures hovered over their dead bodies, orphaned children mourning the loss of their nears and dears, widows looked blank and despaired. It is being said that the battle was so fierce that in aftermath of the battle, Dayā River turned completely red because of the bloodshed.

It is said in oral history that one woman of Kalinga came to Aśoka after the war and said that the battle took away her husband, father and son from her and she has nothing to live for. Miseries of the war deeply affected Aśoka. He declared that hence forth there won’t be Bherighoṣa (sound of the war drums) but Dhammaghoṣa, the resonance of the teachings of the Buddha.  It’s believed after the Kalinga war Aśoka visited Saṅgha (yam me saṁghe upeti) and probably practiced Dhamma for one year (RE-I, Gavimath version). Aśoka visiting the sangha gets further credence because 7th CE Chinese monk I-Tsing (Yijing ) saw an image of Aśoka in a monastery in Magadha where the emperor was attired as a Bhikkhu (Bhikṣu, a monk).

Thereafter, Aśoka dedicated his entire life in promoting Dhamma by sending Dhamma missions to far-off lands (RE II, V, XIII) and paid Dhammayātrā-s (Dhamma pilgrimage) to sacred places associated with Buddha and his prominent disciples.   On his 12th and 26th years of reign, Aśoka worked to spread Dhamma through inscriptions carved on polished rocks and sandstone pillars. Emperor Aśoka called his edicts Dhamma Edicts (RE-I). While his given name was Aśoka, meaning ‘without sorrow’, as mentioned in his numerous edicts, he assumed the title Devānaṃpiya Piyadasī, meaning, ‘Beloved-of-the-Gods, he who looks on with affection.’


Gradually, in stages, Buddhism came to its ebb in Indian subcontinent by 13th CE. Odisha was among one of the last strong holds of Buddhism in India. Ancient remains suggest that the monasteries of Udaygiri, Lalitagiri and Ratnāgiri in Odhisa continued to flourish till 14th-15th CE.

Major Markham Kittoe was first to report about the Dhauli rock edicts in 1837. Kittoe noticed that local people of Bhubaneswar and priests in particular were reluctant in sharing about the places of worship. Actually, just a few years before 1837, European antiquarians like Colin Mackenzie and General Stuart had ransacked many places of worship in and around Bhubaneswar and removed many sacred idols. Kittoe almost missed the inscription site when the people living in the vicinity of the inscription decoyed away from spot by assuring him existence of no such place. Fortunately, returning back a mile, he found a person who led him back to the inscription place.
Kittoe noticed that the rock has been hewn and polished for a space of 15ft long and 10ft high and divided into four tablets where the inscription have been deeply cut.   Immediately above the inscription is a terrace that had the fore half of an elephant (4ft). Because of this elephant the place was locally called Aswathāmā (legendary elephant Aswathāmā of epic Mahābhārata).

People informed Kittoe that the Aswathāmā was worshiped only once in a year when local priests threw water and besmeared the elephant with red lead.   With a great difficulty Kittoe made a copy of the inscription. He also had to kill a mother bear that was creating trouble.  Kittoe sent the copy of the inscription to James Princep, Secretary, The Asiatic Society of India. One year later, Kittoe had to revisit Dhauli when James Princep requested him to reexamine the transcript and correct the inscription. Kittoe spotted the two cubs of the Bear which he had killed the previous year. The Bear cubs were now grown up and were in no mood to welcome the guests.


In 1837, James Princep successfully deciphered the Edicts that were discovered from Sanchi, Delhi, Allahabad and Dhauli. We now know these edicts as Aśokan Edicts. In the following decades, more and more edicts were discovered from different parts of Indian subcontinent. The Aśokan Edicts are broadly divided into three categories,
1. Pillar Edicts (PE, set of 7 edicts) inscribed on monolith pillars discovered at 13 places.
2. Major Rock Edicts (RE, set of 14 + 2 separate edicts found at Dhauli and Jaugada, both in Odisha) inscribed on rocks and boulders discovered at 11 places.
3. Minor Rock Edicts discovered at 21 places.

Aśoka's edicts are mainly concerned with the reforms he instituted and the moral principles he recommended in his attempt to create a just and humane society. In his 13th RE, Asoka has mentioned about his conquest of Kalinga involving a great carnage, captivity and misery to the people. Surprisingly enough, Aśoka does not mention in this inscription the name of the King of Kalinga against whom he fought that deadly war. It was customary in those times for a victorious king to record the name or names of the kings whom he defeated. Also, Aśoka has deliberately omitted the 13th RE that talk about the Kalinga war in his Dhauli Edicts. Instead, in its place two special edicts known Kalinga Edicts which are conciliatory in nature meant for the pacification of the newly conquered people of Kalinga are incorporated.

I find it little intriguing that the 7th CE Chinese monk Xuanzang (Hsüan-tsang, Yuan Chwang ) in his accounts has not mentioned about any of the Aśokan Rock Edicts. We know from his travelogues that he visited Girnār, Shabāzgarhi and Oḍra but conspicuously he is silent about the Rock Edicts at these places. Probably, immediately after the collapse of Mauryan Empire, the Rock Edicts got cut off from the tradition and faded into oblivion. Archaeological evidence suggests that Dhauli in 1st Millennia CE had flourishing Buddhist monasteries.  In 1970, Nichidatsu Fujii(1885–1985), a Buddhist monk from Japan and founder of the Nipponzan-Myōhōji Buddhist Order built World Peace Pagoda on the Dhauli hill. After centuries of neglect Dhauli has once again a small Buddhist community living here and that makes Dhauli again a living Buddhist heritage site.


Government of Odisha is now working towards creating awareness towards the Buddhist past of Odisha. Excavation and explorations in last 100 odd years has revealed that Buddhism flourished in Odisha region since 2nd BCE till 15th CE. Excavations in 1985-92 at Lalitagiri hills have yielded three caskets containing relics. The Lalitagiri relic casket has no inscriptions but we know many of the relic caskets discovered from different parts of the Indian subcontinent don’t have any inscriptions. Archaeological and circumstantial evidence suggest that many kings in Indian subcontinent reopened the Buddha relic stūpas made by Aśoka and redistributed the body relics of the Buddha.  The Lalitagiri relics are most probably Buddhaśarīra (body relics of the Buddha) that were enshrined by some king or prominent monk in 2nd BCE. Unfortunately, all the Buddha relics discovered from India are currently kept in Museums under lock and key. But fortunately, Government of Odhisa is now creating an infrastructure to bring back the relics kept at Bhubaneshwar Museum back to Lalitagiri.

Odhisa has one of the most fascinating Buddhist monastic remains in the World. Monastic remains of Ratnāgiri, Udaygiri, Langudi and Lalitagiri are the ideal place to visit and gain an appreciation for the Buddhist iconography.
Some pictures from Ratnāgiri and Udaygiri 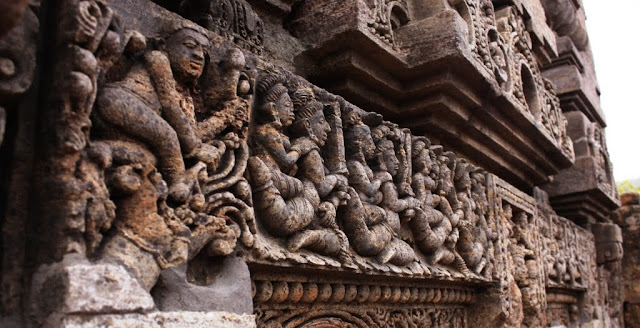 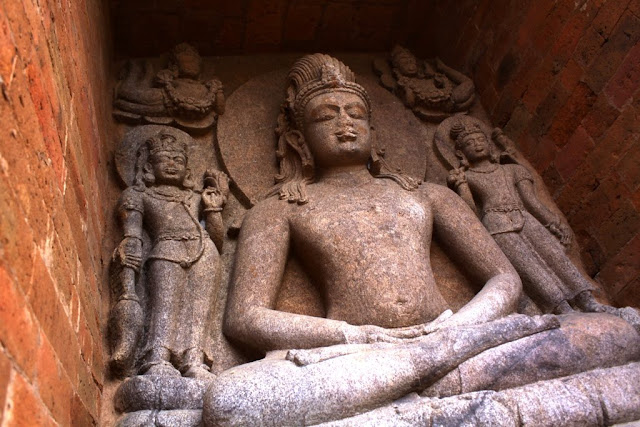 I am thankful to Department of Tourism, Government of Odhisa for inviting me to 4th Kalinga International Buddhist Conclave. I am especially thankful to Dr. Sunil Kumar Patnaik for all his hard work to make the tour memorable and also for offering his latest publication Buddhist Heritage of Odisha to me.

Takakusu, J.; 1998, A Record of the Buddhist Religion by I-Tsing, Munshiram Manoharlal
Publishers, New Delhi, (Originally published in 1896 by the Clarendon Press, London).