An ancient sculpture of Bodhisattva Avalokiteśvara in the form of Jaṭāmukuṭa Lokeśwara was stolen from a community temple in Tetrāwan (Nalanda District) on 26th January, 2013. The sculpture is 24 inches (2ft) long and 13 inches wide. Generally, such theft of ancient sculptures from villages in Bihar goes unreported.  Also most of the time the ancient sculptures kept in the village collectives are undocumented hence even reporting the matter to appropriate authorities is not of much help. In Tetrāwan, luckily, Shri Rajiv Pande a heritage volunteer from the village, had taken photographs of the stolen sculpture from his mobile phone just days before the theft.  In recent years we have surveyed many villages of Bihar to document the neglected heritage and facilitate awareness among villagers towards its protection and preservation. Our awareness generation efforts have started paying results. Now there are several examples from Maher and Lohjarā (both in Gaya district), where the participation of heritage volunteers led to the recovery of stolen images of Buddha.  These examples are encouraging other villagers and heritage volunteers like Shri Rajiv Pande to come forward and report the thefts.  The Tetrāwan sculpture was stolen four years ago. Stolen sculptures exchange many hands and go through auction houses like Sotheby’s, Bonhams, Christie’s etc before reaching their final destination - usually museums. Reporting the theft of the Tetrāwan Avalokiteśvara in Art Loss Register, London will help in tracking the sculpture in auctions and collections of international museums.

Tetrāwan is situated 20kms east of ancient Nalanda University. Artefacts and ancient remains in Tetrāwan suggest it to be a very prominent Buddhist monastic centre in ancient times. This village finds mention in survey reports of all the prominent explorers and archaeologists of 19th CE like A. M. Broadley, Sir Alexander Cunningham etc.

We urge like minded people and institutions to help us find and restore this beautiful statue to its find spot i.e. Tetrāwan.

The Buddha statue (9th-10th CE) that was stolen from Lohajarā village (Wazirganj block in Gaya district) in 2014 was brought back to its findspot finally on 30th January 2017. The statue was recovered from a house in Sithaurā village in Nalanda district in August 2016 by the Nalanda police.

People of Lohajarā had very little hope of finding the stolen Buddha statue. Their apprehension was not without reason -- thousands of ancient statues went missing from the villages of Bihar in the past few decades, of which very few were recovered. This particular statue from Lohajarā, fortunately, was documented in 2011 by me.  When the statue was stolen, without wasting any time, I registered the theft in the Art Loss Register, London. The registration of the theft played a key role in its recovery. The complete story of the statue's recovery can be found on my  blog (Recovery of stolen 'Lohajarā Buddha' Sculpture).

Shri Rajesh Pande, a heritage volunteer from Lohajarā took the initiative and pursued the matter with the concerned officials in both districts. On 30th January, after submission of all the requisite permissions, the villagers of Lohajarā finally received the lost statue and brought it back to their village. The villagers realize that safeguarding the Buddha statue is very important. They now plan to build a temple where the ancient statue can be housed.  They hope to find some Buddhist donors who would contribute in the making of the temple. 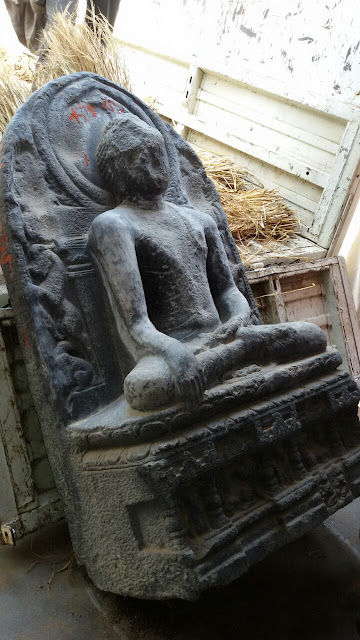