Griddhakuta as we know it today is the remains of an old monastery at the top of a hill. The concrete paved way to the top from the base of the hill is the same that was used by King Bimbisara when he used to visit Buddha. The hill has numerous small and big stone caves where Buddha and his associated took refuge from the harsh weather while meditating. There are accounts of each particular cave linked to various disciples of Buddha and has significant importance for the Bhikkhus following in their steps. The place is very important for Mahayanist all over the world and the Mahayanists consider that the first turning of wheel took place here. The place is also site where Buddha delivered sadharmpundrika sutta. A stupa was erected to mark this event and the stupa is still present. The base of the hill also has stone rests and caves where many important disciples of Buddha meditated. 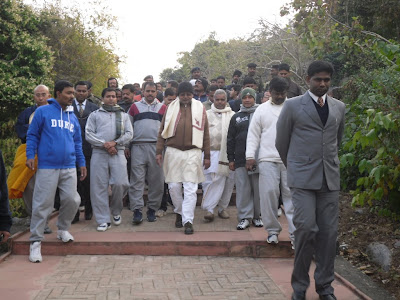 It was proposed that a circumambulatory path is built around the remains of the monastery encompassing the top portion of the hill and making some of these caves more accessible at the base so that Buddhist pilgrims can visit the shrines and its sacredness can be shared more visiting tourists. The CM was very appreciative of the idea and he encouraged the fact that the community is taking a lead and proposing infrastructure improvements so showcase its heritage, he communicated to the state tourism department to proceed further with the construction of a circumambulatory path as per the proposal. North of Griddhkuta on top of a separate hill is a massive brick stupa from the Ashoka period. Xuanzang points out that this stupa was built to mark the event when Buddha beheld the empire of Magadh and preached law for 7 consecutive days. There is no marked path to the top of the stupa and that makes in inaccessible for most visitors. There is also a Vishwa Shanti Stupa on an adjacent and it has a historic trolley system to take the visitors up the hill.
Since there no comprehensive plan for the heritage management and no mechanism for revenue generation, there are no new improvements done to develop the entire site. Currently, all a visitor needs to pay is vehicle parking charges at the bottom of the hill and that income goes out to the maintenance of existing infrastructure and no new improvements can be planned based on that little in flow on money with major monetary help from an external source. For tourism to be part of mainstream economic activity, we need a plan with upward spiral where there is scope for investment in the infrastructure to provide better facilities and in turn demand an entry fee or something like heritage zone fee to do the same.

The three destinations in the close vicinity provide ample opportunity to include in heritage zone comprising Griddhkuta, Vishwa Shanti Stupa and the Stupa on the North Hill. 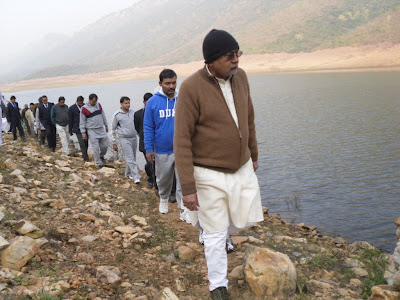 If a spiral route could be developed at the initiative of the local community that would increase future prospects of many such sites, make visitors more demanding and receptive and Government officials will have to be more accountable.
Posted by Shalini at 5:00:00 AM