The track from Rajgriha to Parwati has many sacred places along the way and CM visited a few of these spots and gave instructions to all concerned departments for early finish of the projects related with road, forestation and bridges. He inspected the ongoing work of three important bridges that when complete will reduce the travel time and distance between rajgir and Parwati. 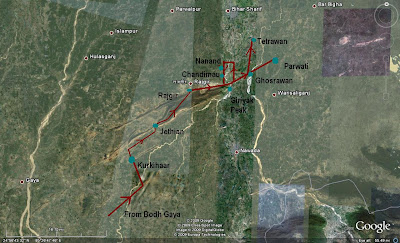 Griyak peak Lat- 25° 01’, N, Long- 85° 30’ E)
Griyak peak is currently proposed to be the first spot between Rajgir and Parwati to be developed as tourist attraction.
The Griyak peak is one of the most massive structures in the region and is visible from distance.
It consists of a 25 ft brick pillar from gupta period and a massive cubical shaped rock structure with dimensions around 60 X 60 X 60 Meters. The evidences on the site suggest that this was once a very lively place with frequent monastic activities. This brick structure and the stone structure have witnessed some happening times during Gupta and Pala period as suggested by the massive remains.
The site is a must see for all Patrons of Buddhist art and architecture. It is about a 300-meter walk to the top of the hill where the stupa is situated and the views of river Panchane to its east are incredibly beautiful. 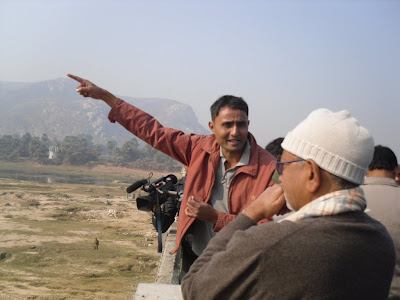 
Ghosrawan (Lat- 25° 05’, N, Long- 85° 34’ E)The mounds that were essentially the remains of huge religious structures were full of rich materials that were repurposed extensively by the newly settling populations. As per the Inscription discovered by Kittoe in 1848 amongst the ruins, this was the site of Vajrasana Vihara erected by Monk Viradeva. The inscription states that Monk Viradeva had earlier in his life studied in the monastery of Kanishka. He then found his way to this part of ancient Magadha where he stayed at a Vihara of Yasovarmanpur and was consequently appointed to govern the monastic establishment of Nalanda.
In the modern days the village is a popular destination for Hindu devotees. A big temple housing old pala period sculpture is under construction over an old temple. This temple is popularly called Asha Mata temple and on every Tuesday lots of devotees flock to sacrifice Goat. It is believed by performing such sacrifice at this temple wishes comes true. 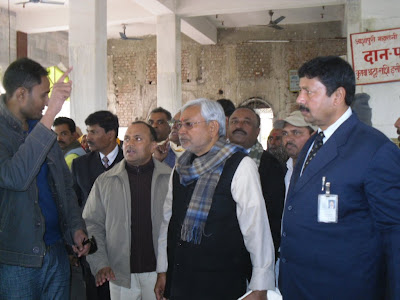 PIC: temple at Ghosrawan
The central image at the temple is beautifully decorated and some colors have been applied to make it more conspicuous. As per the belief the Devi sculptures are generally covered with cloth and should not be removed. A big sculpture from the village is placed in Patna museum. There are many other sculptures big and small, pillars and other structural and architectural elements scattered through out the village is often found repurposed in many individual houses too.

Tetrawan (Lat- 25° 07’, N, Long- 85° 35’ E)
As per the Inscription found in village the place was once known as “Tenta-di-grama”. The size of the mound and the name suggests it was a monastic site. Main attraction of the village is a huge black stone Buddha in Bhumisparsh mudra. The size of image is almost 10 ft tall. And is one of the largest images in whole of the region. Lots of foreign pilgrims visit the place and the locals have constructed a temple with help of their contributions. The CM spent considerable amount of time with the community discussing how best we can use the surrounding. The place has two huge water bodies, which can be suitable for developing into a recreational area in order to attract more pilgrims. 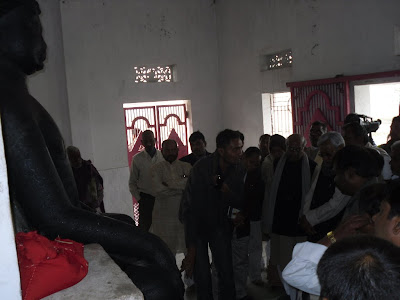 PIC: Colosal buddha at Tetrawan
Parwati (Lat- 25° 05’, N, Long- 85° 38’ E)
The hansa stupa at the top of the hills is one of the most intact stupa which marks the site of sacrifice of a wild bird for the pious Bodhisattvas. The associated folklore goes like this, ‘One day a monk from the monastery saw a flock of wild geese flying overhead and he jokingly commented “today there is no breakfast for the brethren; the mahasattva must know the right time”. Before he finished speaking one of the wild geese dropped, all the monks were greatly moved by this selfless act and the goose was buried and this tope was erected over his body as a sign of great respect.

Buddha shared an invaluable insight with us humans at Indrasaila Guha, ‘Envy and selfishness has brought about hostility among beings. He further explained that the roots of such extreme emotions lie in desire.
The legend associated with this site is another example of the convoluted boundaries between modern day religions. It is said that once Sakka, the king of devas, also known as Indra, visited Buddha here and asked him to answer eight doubts about the mortal life on earth. Lord Buddha gave a discourse in response which is now preserved as Sakkapañha Sutta. Xuanzang mentions the presence of 42 lines inscribed in the cave in his travelogue.

Chandi Mau (Lat- 25° 03’, N, Long- 85° 29’ E)
& Nanand (Lat- 25° 05’, N, Long- 85° 30’ E)Either Nanand or Chandimau is the place associated with Sariputra. Antiquities of both the village is very rich and both the site deserves attention. The CM visited both the village and spoke to the community about the village being now part of the Parwati circuit, which is being developed at his instigation. ASI carried out an excavation at the site in 2001 and remains of a monastery were unearthed.
These sites were visited by Xuanzang and Fahien and they have left detailed account of these sites, and the antiquities of the area were confirmed when prominent orientalists visited here a couple of centuries ago.
Posted by Shalini at 4:48:00 AM

thank you for you to make me learn more,thank you∩０∩