Heritage Leaders and the Buddhist Sites

In the course of our exploration travels around Bihar in search of ancient Buddhist heritage sites, we have had the opportunity to meet several dedicated people who are working on generating awareness for the preservation and appropriate use of Buddhist heritage sites. Krishna Kumar, Deepak Kumar Dangi, and Shailendra Kumar, are three such heritage leaders who are doing their part to educate the people of and visitors to their villages.
Krishna Kumar, whom we met at Vaishali, is working for the development of Buddhist sites in and around Vaishali. He guided us to a few known and unknown sites of Vaishali, especially sites around Bakhra, an area with stupas mentioned by Xuanzang and Fahein that were associated with important events related to Buddha and his disciples. Presently, modern Bakhra is densely populated with people living over the remains of the ancient Buddhist past.
Krishna Kumar also took us to a place called Alar, which according to the local belief, was the place where Buddha met Alar Kalama. Alar Kalama was the first teacher whom the Buddha met after the great renunciation (i.e., when he left Kapilavastu). The whole Alar village is settled over a mound with antiquities and stories everywhere. We were shown by Krishna Kumar an ancient terracotta ring well and several similar wells still in use. Unbeknownst to the people using these wells, their antique value would be lost if it were not for Krishna Kumar and his awareness generation work to ensure that these antique pieces are not damaged.

A resident of Alar took us to an ancient well that was recently destroyed to construct a small bridge over a water channel. A sad event to witness, this piece of heritage was lost due to a lack of sensitivity toward ancient Buddhist heritage. Krishna Kumar did what he could to prevent any further damage to such heritage in future. In the past, he has generated awareness by organizing a few small exhibitions at Patna to showcase the heritage of Vaishali.

Another heritage leader we met during our exploration trip was Deepak Kumar Dangi of Dharaut Village. He is a post graduate and grocery shop owner in the village. Dharaut is big village with antiquities spread everywhere. With his keen eye, Deepak Dangi spotted us moving around the village with a kite and taking pictures.  He rushed to us and made the necessary enquiry as to our purpose. In the past there have been instances where strangers have visited a village, and subsequently, idols were found missing, possibly stolen from their places. With reassurance to our good intent of documenting heritage sites, Deepak Dangi then took us around the village personally and told us many stories associated with the ancient heritage.

Over the past few years, he has found antiquities in the area and collected them all together for safe keeping. He has also collected information about the village from different literary sources collaborating some of his finds. Deepak Dangi has facilitated generating awareness regarding the significance of his village through various mediums, such as, research journals and newspapers. 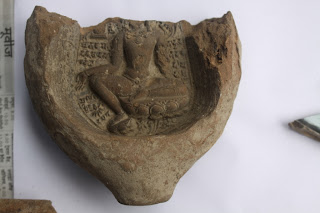 Another heritage leader we met during our travels was a local villager, Shailendra Kumar. Meeting him at the Keshariya Stupa, he informed us that he was part of the excavation effort of the “World’s Biggest Buddhist Stupa” at Keshariya in 1998-99 under K.K. Mohammad ( Archaeological Survey Of India).

To generate awareness about the Keshariya Stupa, Shailendra Kumar has made efforts such as seeking political leader involvement, asking questions of parliament, and initiating media campaigns.  He has prepared a conjectural design of the stupa’s possible original shape in order to restore it to its glory of ancient times. He is the best person to take you around and tell you about the local folklore associated with the stupa, its excavation process, and how it should be restored. He is also making efforts to involve the Buddhist community in setting up monasteries in the locality.

With the vastness of the Buddhist heritage in Bihar, government agencies alone cannot take care of the many needs of this heritage. Only with community involvement and cooperation can such needs be met. Last year, Nava Nalanda Mahavihara Sanskritik Gram (NNMSG) provided a platform to acknowledge a few of these important heritage leaders during NNMSG’s “Engaged Buddhism” workshop.  This year NNMSG is designing a special recognition in the name of Maha Kassapa to recognize one heritage leader who has gone “above and beyond” in her/his work toward generating awareness and preservation of Buddhist heritage in Bihar.
Read more- Engaged Buddhism Workshop by NNMSG in 2011