At the start of the tourism season, the women's cooperative of Nepura  is ready with a new range of Sujuni and home furnishings. Nepura women's cooperative is popular for their traditional stitch work called Sujuni. Sujuni was traditionally made by rural women, and Sujuni based quilts and bedsheets were traditional gifts exchanged in marriages and for festivals. The stitch pieces are inspired by dynamic and diverse motifs, stories from daily life, and historical and contemporary social issues. At Nepura, the artisans have made an effort to create sujuni using Buddhist motifs, recreating the life and stories of the Buddha with needle and thread. 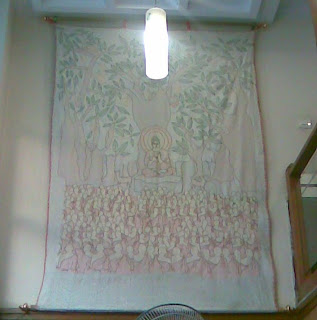 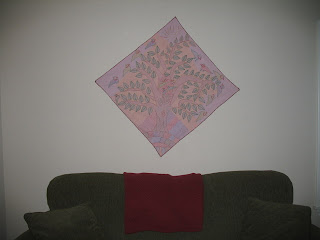 Xuanzang celebrated Chinese monk scholar, came to Nalanda in 7th century CE. As per the story he was given a royal welcome at Nalanda by the Monks and the lay people. 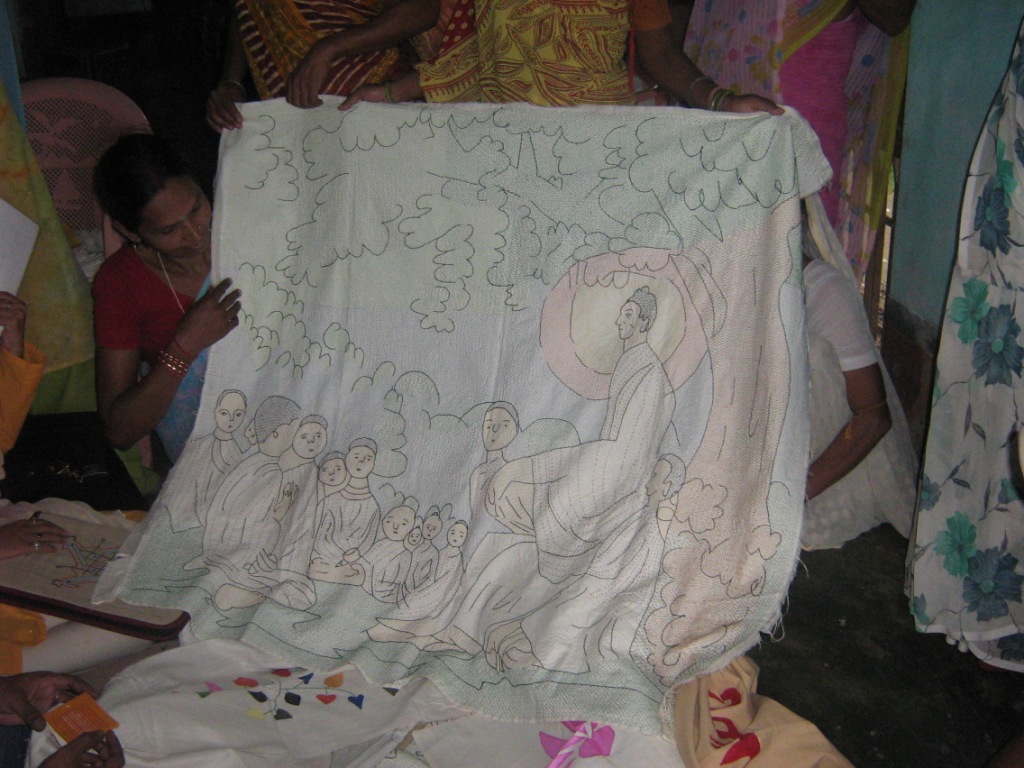 
Bed-sheets with stitch work are very much in demand by the visitors, it normally takes around 10 days to prepare one bed-sheet with hand embroidery work.
The Eternal knot iconography symbolised Samsara i.e., the endless cycle of suffering or birth, death and rebirth within Tibetan Buddhism. The Knot overlaps without a beginning or an end, symbolizing the Buddha's endless wisdom and compassion. The placing of the endless knot on a gift or greeting card is understood to establish an auspicious connection between the giver and the recipient.The products with this motif are very much appreciated by the patrons and buyers 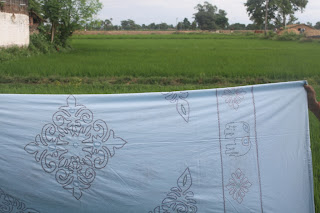 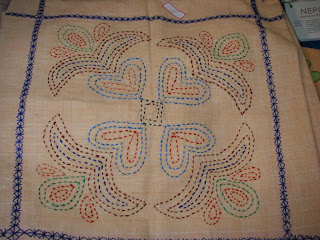 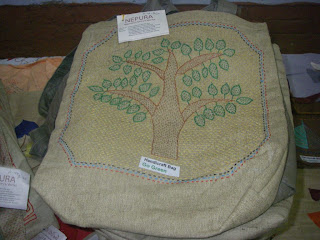 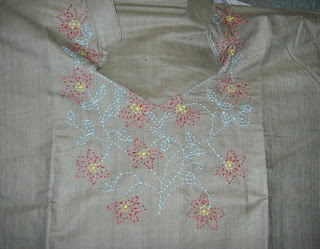 Khatwa- Traditional Applique work
Khatwa is traditional applique work popular with rural women. Traditionally it  started with using old, torn pieces of cloth sewn or fixed over another. In the recent past, Khatwa has gained much appreciation from the patrons of art. The traditional use of motifs and pattern from day to day life are very popular with the buyers. At Nepura, Buddhist motifs, too, are used by the artisans.

Nepura in "India Calling!" Event in Los Angeles
September 19 & 20, 2009
Smt. Renu Devi, President of Anchala Ladies Cooperative, Nepura, participated in the event at Los Angeles.
It was the second time that an artisan from Nepura was invited by the Government of India to participate in an International event. Last time, two artisans, Sushilaji and Maltiji, participated in "India@60", held at Singapore in 2008. Renuji had a nice experience interacting with the visitors at her stall.

In Feb 2010, Anil and Mayura, visited Nepura. Anil and Mayura were associated with the Endogenous Tourism Project of which Nepura was also a part. Anil and Mayura have a strong bonding with the community of Nepura. Both of them have contributed a lot in shaping the project since its inception in 2005.
The community was very happy to have them once again at Nepura. 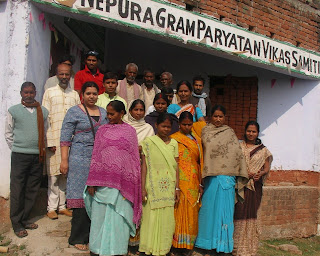 Home stay is an integral part of rural tourism. Nepura, also will have a home stay soon, the process has been initiated. A traditional house in the village has been identified for this and the owner is willing.

Nepura has around 50 traditional weavers unit. Nepura is also famous as "SILK Village" for its traditional Tasar weaving craft. "Nepura Village Tourism Development Committee" and The Nepura Weavers Cooperative have together started a weavers unit at the Interpretation center. 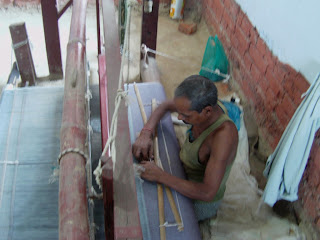 With decrease in production of  tasar cocoon, the cost has increased many folds in last 5 years.  Weavers  are gradually moving from  tasar weaving to weaving other varieties like cotton and China silk. The over all scenario of weavers and weaving is very sad in Bihar,  but nepura is still surviving on its own because of its traditional marketing networks. Nepura Tourism Development Committee has made this initiative to link the weaver's products with the women cooperative raw material requirements. Some such efforts were made earlier but that didn't work. This initiative by the new team is a well thought out and neatly executed.

Artisans from Nepura have participated in many exhibitions, events and craft melas. All the events during the project time were sponsored by the project. Even after the project (Endogenous Tourism Project) had come to an end, the enthusiasm of the female artisans is still high. They leave no opportunity to put stall at any given opportunity. Though response in such fairs is still less than expected, this will improve as more awareness is reached through publicity.  Now we need to grow the community participation for tourism. 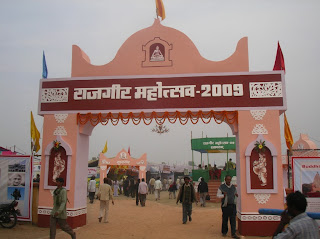 "On the Footsteps of Xuanzang" Circuit

Bihar has many villages which has rich Buddhist remains. Most of the remains are unprotected at the mercy of the Community living by the heritage. This heritage is of immense importance to the Buddhist all over the world. The biggest contribution of the Endogenous Tourism Project to Nalanda and Bihar is that it has set a path for the heritage villages by establishing a link between the heritage and rural tourism (Heritage/Cultural tourism).


Nepura lies exactly between the Rajgir and Nalanda, and any ancient path linking the two must have passed through Nepura. This path was once walked by the Buddha and his followers. This idea led to the design of "Footsteps of the Xuanzang" trail.  Xuanzang mentions about 30 odd places associated with the Buddha and his eminent disciples. A brochure was designed accordingly, and was presented to the Chief Minister Shri. Nitish Kumar. 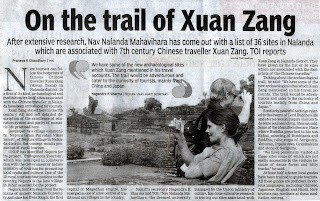 The CM took interest in this heritage trail and he stayed at Rajgir for 1 week (24th Dec to 31st Dec 2009). He took this ancient pilgrimage trail as mentioned by Xuanzang. During his stay, it was announced that the revival of this ancient trail will link these heritage villages  and develop them as Rural tourism sites. 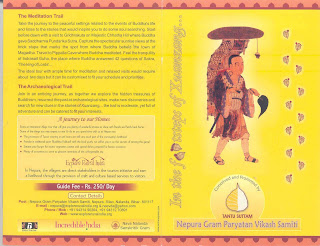 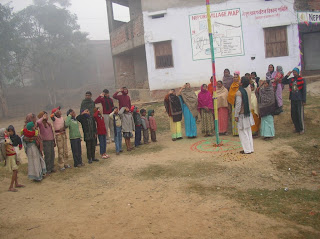 Computer Classes for the Cooperative members


Computer literacy is very essential in the long run for the women artisans and the weavers as well.

A computer was purchased under the Endogenous Tourism Project. At least 5 women artisans can start the  computer, see design files and play music. Though this is a good beginning, the target now is for them to be able to access e-mails. Keeping this in mind, a weekly computer training classes is arranged and the response is encouraging. 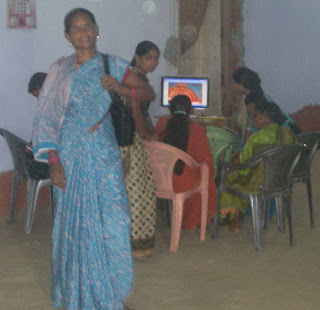 The never ending work of the Physical Infrastructure

In spite of all efforts by the NGO partner, ADITHI, to involve the community in the decision making process  for hardware work, the district administration  halfheartedly welcomed the idea. The contract work was offered to a local goon to intimidate the community from raising any voice against the ongoing physical infrastructure work. But still the community people raised thier voices and it was ignored by the district administration. All this happened in 2006 and 2007. Money was siphoned off by the administration and the department engineers.The project was supposed to be complete by December 2007 , but all the inordinate delays at most of the ETP sites led the project to extend for one more year untill December 2008.

In 2008, we had a change in district administration and the new district magistrate took notice of the complaints. But by then, the damage was already done and the Nepura is still bleeding. The 2008 tourism season was approaching and  the project was supposed to be officially over. The unfinished work was a big cause of concern among the community of Nepura. They staged dharna and a protest march against the irregularities in the work. CM took notice of this and State tourism department was asked to do the necessary. 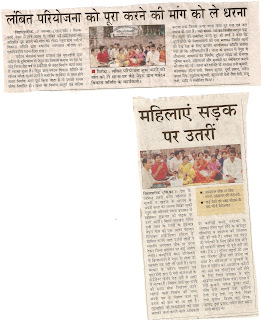 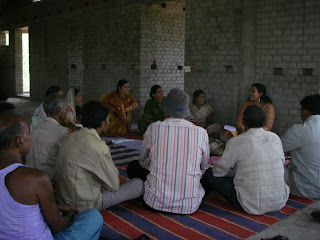 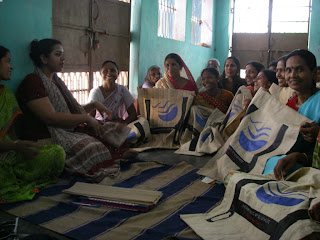 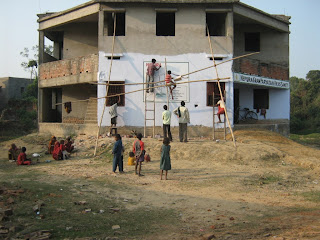 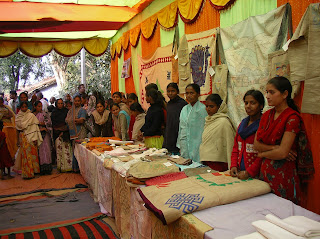 Remarkable things here. I am very satisfied to peer your article. Thank you so much and I’m having a look ahead to touch you to buy Best cushion covers in delhi . Will you kindly drop me a mail?