"The only thing necessary for the triumph of evil is for good men to do nothing." Edmund Burke


Times of India Reports
27th August-2011
On the 12th August 2011, we informed the Government by writing a brief report regarding the importance of Barabar Hills and how it is being damaged. The revealing story was also published in the Times of India (19th August 2011). I visited the site again on the 27th August, but I found the situation unchanged. This "Heritage for Sale" is occurring during broad daylight. It is very disturbing that those in authority who have an oath to protect such areas are instead contributing to the very destruction at hand. Because the Barabar Hills are an integral part of the Buddhist Heritage of Bihar, this area should be preserved in a most refined way.  The thought of this irreversible loss is very saddening and depressing.
This time I had an opportunity to meet a local man who is part of this illegal trade. He mentioned how the local police station is paid Rs, 1000 per trolley per month and in exchange the police ensure that the community remains a mute spectator. I need not mention that there are more than 1000 small and big trolleys operating fearlessly and destroying the heritage mercilessly. 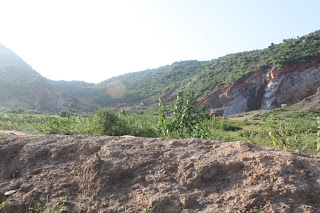 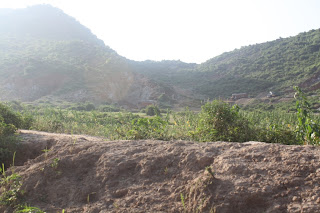 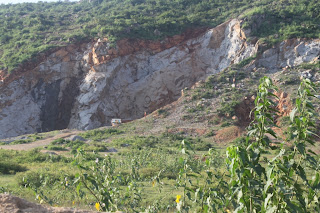 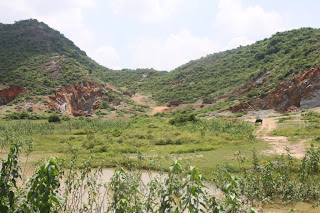 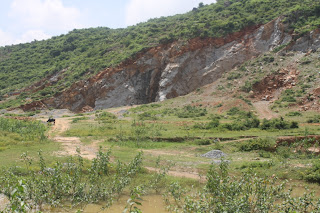 One way this can be stopped is by destroying access to the hills. The Barabar group of hills is surrounded by villages which have black-top roads and, at some places, even cause-ways for pilgrims. This easy access to the hills is aggravating the situation. If Government is serious about stopping this menace then it needs to present a plan to monitor the use of these cause-ways and black-top roads. In addition, this effort should be coupled by strict vigilance and community involvement. 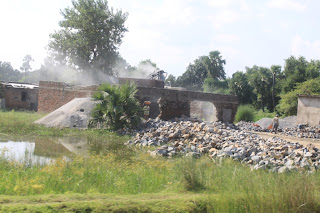 As I sadly listened to the local villagers during my last visit to Dakra Village, they told me that they had no faith in the local administration. When they approached the police personnel, they were told, “This cannot stop now, it generates employment. Where will these people now go?”
This explanation by the police personnel is very alarming. It implies that the place has reached a stage where eating away productive resources is the only way left for survival. Why he is saying this probably is not hard to understand but what is more worrying is the “conditioning” of the mind of government officials. This is a downward spiral, a collective failure of various departments of Government to recognize, organise these resources and incorporate it in sustainable way in our livelihood.   This goes against what our constitution says about the primary duty of government, i.e. to secure, build and ensure conditions that are conducive to the creation and maintenance of wealth. Corruption must be stopped in its tracks and replaced by honest jobs that support sustainable livelihoods for all.
View of the Barabar Group of Hills from Barki Barabar Hill
Xuanzang in his travelogue has mentioned about these hills. He approached the hills from North and mentions about two big peaks amid dense forest. The peak on east he says was the place from where the Buddha blessed Magadha Empire, a stupa was erected at that spot. Most probably the mahadeo temple, rests over the top of the Stupa remains. The high peak on the west he says is the place where the Buddha meditated for one night.
My objective was to relate the remains at the top of Barki Barabar hill with the Xuanzang's description.
Waters, Thomas (1904), M.R.A.S. On Yuan Chawang’s Travels in India 629-645 A.D. Book- VIII, Page-105-6 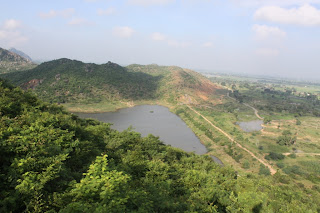 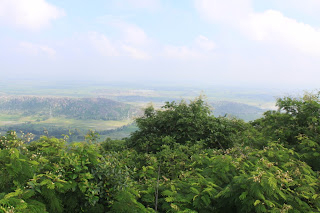 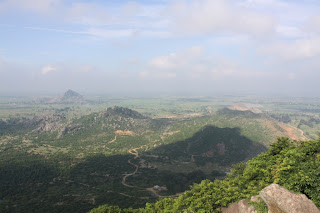 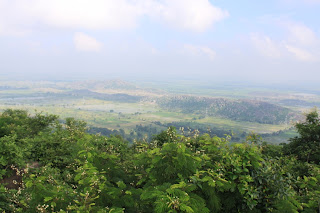 Xuanzang traveled 90 Li South-West from Tildhaka Monastery (now Telhada) to reach here. He didn't climb the hill, he said " No one has visited the spot for ages; but looking at the mountain from a distance, one can see different kinds of beasts and snakes turning round it to the right". According to Xuanzang the Buddha entered on ecstatic meditation here.
" Of old, when Tathagata descended as a spirit, he rested on this rock, and entered here the samadhi called "perfectly destroyed" and passed the night so".
Xuanzang mentions about a large and remarkable rock and over it a 10 Ft  high stupa.  He further adds how the gold and silver stupa raised by devas got converted into stone boulders.
And i was surprised to find the place exactly same as Xuanzang's description: a big flat rock at centre and at the top of it stones arranged like a stupa  and the place filled with boulders.
Presently the places is all occupied by dense bushes obstructing the view.  May be month of march and april is the right time to revisit the place. 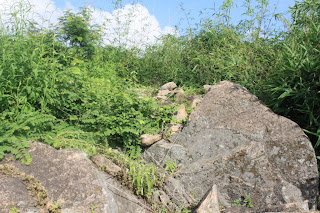 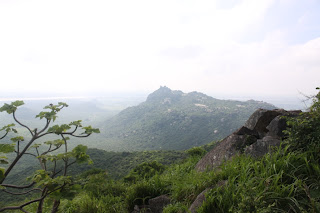 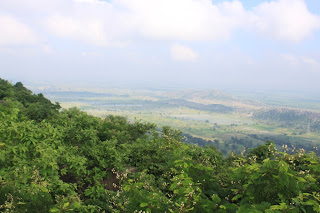 The beauty of Barabar group of Hills helps inspire us to take care of this landscape once walked by the Buddha and followers of his teachings for more than 1500 Years.
Posted by Deepak Anand at 5:30:00 PM