Nava Nalanda Mahavihara organised a one day workshop on “Engaged Buddhism” on the occasion of the World Tourism day on 27th September, 2010 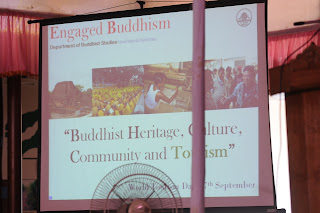 Nalanda and its vicinity is among few sacred places where Buddha made his sublime wanderings.  This land is bestowed with rich tangible and intangible Buddhist heritage and most of the heritage lies unprotected in the villages. Since long it was desired to devise programmes that could facilitate a mutually beneficial relationship between the heritage and the community. This was the guiding force for the conceptualization of The Department of Buddhist studies at Nava Nalanda Mahavihara.

“Mapping of Nalanda” is one such project conceptualised by the department to bring all the stakeholders of the heritage on one platform.
The broad objectives of the project are,

The objective of this workshop was to bring stakeholders of Buddhist heritage on one platform. Heritage leaders from all the villages where we have been working for last 5 years were invited to share their opinions and experience on how this long neglected heritage can be protected, restored and revived.
In past the NNM has conducted exhibitions, events and workshops to achieve the objectives of the project. In continuation, the department organized the one day workshop on “Buddhist Heritage, Culture, Community and Tourism” to take it a step further than the art and cultures conglomeration.

Take part in the events of the day through the following pictures:

The workshop began with Mangal patth by the Bhikku Sangha 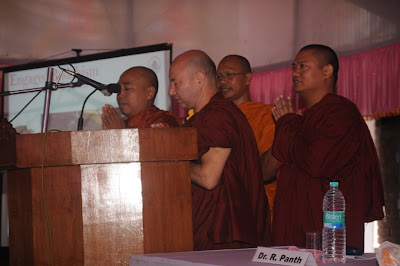 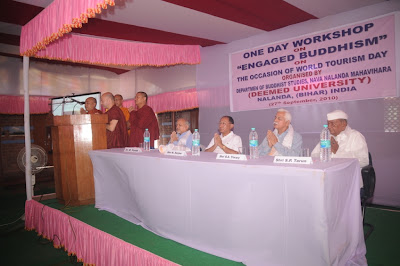 Welcoming the guests by offering  Khatta
﻿
﻿﻿In past few decades we have been  partially successful in invoking the interest of the world community  in Bodh Gaya, Nalanda, Vaishali and few other Buddhist sites but these few sites are a very small part of the big heritage that flourished for 2000 years in this part of India. The heritage has undergone many changes following the decline of the religion but as we are unearthing the structures and the facts, it needs proper interpretation and conservation. Documentation of the heritage in the modern world started in the 18th century as we know it today and we became an active participant since 2005; and continued documentation of the Buddhist Heritage spread around in villages of Nalanda.
The presentation was titled “Buddhist Heritage, Culture, Community and Tourism”. 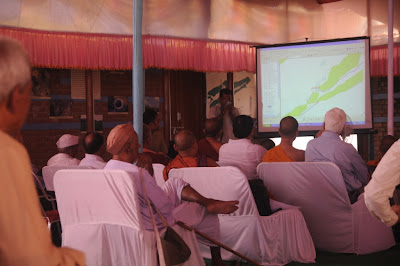 Overtime and with the help of the community a vision plan was developed by reaching consensus on how we can best revive this ancient Buddhist pilgrimage by effectively sharing it and yet actively protecting it. This vision plan was a long process and it involved many stakeholders over a considerable time. This one day workshop was about sharing; the vision-plan that has been developed so far, with the stakeholders and receive their feedback to further fine-tune it and make it universally acceptable. 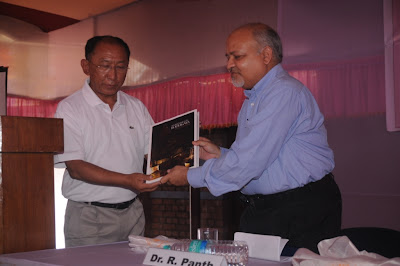 Another major component of this workshop was to launch the souvenirs that have recently been developed utilizing the local arts and crafts. The intention behind this move was to promote and preserve the inherent culture and make sure community directly benefits from the tourist activities while ensuring that the visitors get a true piece of art rather than a factory fabricated mass-produced article. This effort promotes a healthy symbiosis through which the local community shares a little peek with of the rural art and craft and the tourist carry a memorabilia which has true local roots.

The souvenirs are inspired by the antiquities found during the course of excavations of the heritage site in and around nalanda. These were valuable finds and required a lot of research in identification of suitable souvenirs that are meaningful, easily replicated by hand with the use of local materials and help showcase the heritage of Nalanda. Nava Nalanda Mahavihara Sanskritk Gram (NNMSG) put forth the budget and resources for all the research and in the development of suitable design products.

These were the steps involved:
Tourism provides a window of opportunity for the cultural exchange among the visitors and the host community. World Tourism Day was a perfect occasion to begin the new tourism season with new flavor, new colors and new products. At NNMSG the artisans experiment with the skills and come out with new souvenirs that have roots in our rich heritage. This year the artisans have designed few souvenirs based on the Buddhist theme with local roots.

These souvenirs were launched at the function.
﻿ 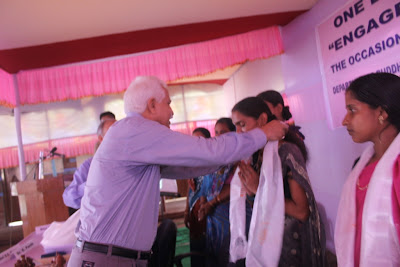 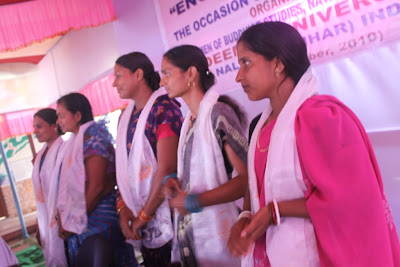 The artisans from the cooperative being felicitated


Shri Ram Pukar Singh, has dedicated his life for drawing the attention of the authorities to protect the scattered heritage of chechar. Chechar like many other villages in the area indeed needs atention. Ihe place has a couple of stupa remains which are very important to the Buddhism history, one of them is Ananda's parinirvana stupa. Xuanzang and Fahein both visited this place as part of their pilgrimage to the Land of the Buddha. Shri Ram Pukar Singh has collected lots of antiquites from the fields by banks of ganges and has put them in a Museum that he maintains himself. He is a living example for all of us to emulate.

Parwati is the site of Indrasaila Guha, where the Buddha frequented and it was here that he answered 42 questions of lord Sakra. Apsadh is a neighboring village full of antiquities and this village is mentioned in Pali sources as Ambasanda village. Buddha and the Sangha found patrons here.


Shri Narendra singh ji is a retired school teacher who is generating awareness about this heritage among the community and government. the parwati hill has remains of 4 beautiful stupas that needs protection.

Jay Jay is a Korean, working in an International NGO "Join Together Society", JTS is working with the community in and around Pragbodhi Hill. The Pragbodhi is an important Buddhist site where Buddha did meditation few days before he finally attained BODHI under the bodhi tree, Bodh Gaya. 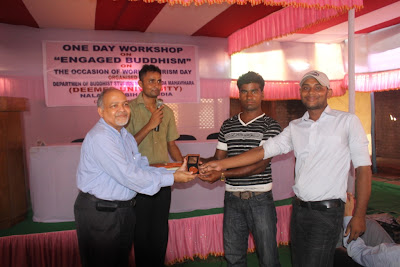 Rajesh and Arvind are youth from Gurpa, Gurpa hill is the place where Maha Kashyappa attained Parinirvana. Gurpa  is situated on the top of a hill and the pilgrims have to climbs about 1700 steps to the top, the provides a lots of potential for community involvment and we have made a  beginning here. 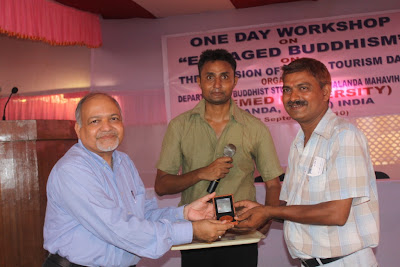 Vendors are ambassadors of heritage and visitors spend a lots of time with them and yet they were never thought as an integral part of the heritage and this reflected of unorganized mess created around the heritage sites of Bihar and infact most of India. We took a new initiative in Nalanda and involved vendors as an important component of community involvement programme here. There have been many mutually beneficial meetings with them in past and their response is truly encouraging. 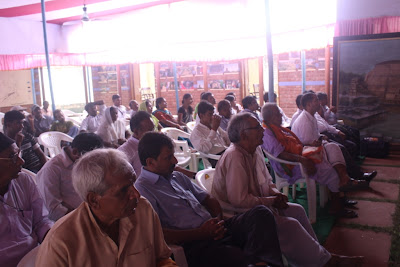 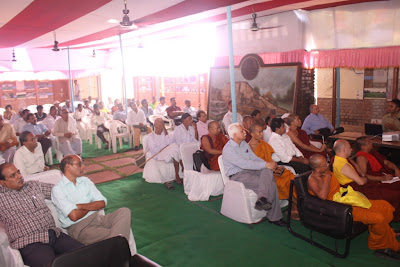 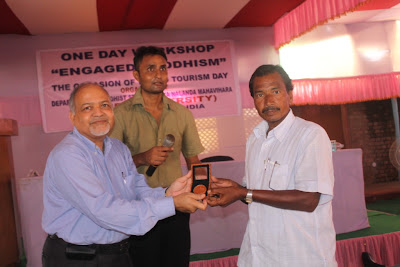 We also had representatives from village Juafardih, the site of Maha-Moggallana Parinirvana Stupa. One of the next few planned events is a Workshop at Stupa site on 5th December 2010. Moggallana attained parinirvana on New Moon day of Aghan (Nov-Dec) and this celebration will begin a new chapter of taking tourism beyond Nalanda Remains and revival of ancient Buddhist Pilgrimage. 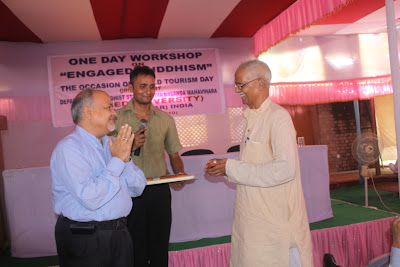 Shri. Sadhu Saran Singh, is from Jethian. Jethian is midway between Bodh Gaya to Rajgriha and it was here that Buddha was received by Bmbisara after the Buddha attained enlightenment.

A photographic exhibition “Echoes of the Footsteps of the Buddha” was also arranged on the occasion. 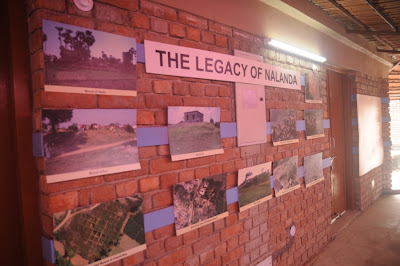 An Exhibition "Echoes of the Footsteps of the Buddha" was arranged for the visitors to appreciate the rich heritage of Nalanda and around. The department of Buddhist studies, NNM has been doing heritage spread around in villages of Bihar. the response was encouraging and in future we plan to design more such theme based exhibitions.


Dr. D. Lama, Head, Department of Buddhist Studies is the man behind the show 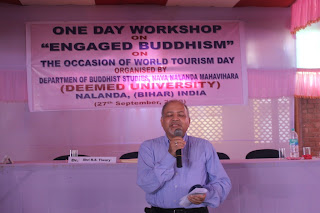 Dr. R. Panth is the Director of NNM and a guiding force behind this grand vision of revival of the Buddhist Pilgrimage.

from this site we get more helpful information. thanx for the valuable information. if you looking for any query about bihar board 10th result 2017 then click on
BSEB 10th result

Bihar Board Students can download their full Bihar Board Matric Result Marksheet from bsebresult.in.