Reviving the Dhammayātrā- A Beginning in 2018

I had privilege to be a part of the third annual Dhammayātrā of the International Saṅgha of the LBDFI (Light of the Buddha Dhamma Foundation International).

As all of us know, Buddhism was lost from the Indian subcontinent in the beginning of 1st millennia. Translation of ancient Buddhist texts - kept in monasteries of Myanmar, Sri Lanka, Nepal and China- from their native languages into English and French led to the discovery of the Indian origin of Buddhism. Further studies of Buddhist texts, especially travel accounts of Chinese monks Faxian and Xuanzang, led to the discovery of the sacred places related to the footsteps of the Buddha.

Most of the sacred sites associated with the wandering of the Buddha like Śrāvasti, Saṅkāsya (also Sankissa, Sankassa), Kuśhinagara, Vaishālī etc. as they are seen today are but the skeletal remains of their glorious past. But, these sacred places were once living heritage sites.  In ancient times, these sites saw a constant footfall of devouts from different countries who visited these sacred places, relived the legends and stories, performed merit-making rituals and recited sutras delivered by the Buddha.

Dhammayātrā by the International Saṅgha under the banner of LBDFI is an effort to revive this very same ancient tradition of Dhammayātrā as mentioned in ancient texts; and hence facilitate development of these sacred sites as living heritage sites.

Earlier this year, International Saṅgha of LBDFI consisting of 34 Theravada monks belonging to India, Maynamar, Thailand, Cambodia and Laos made this sacred pilgrimage. The Dhammayātrā started from Bodhgaya on 27thOctober, 2018 - touched Sarnatha, New Delhi, Sankassa, Lucknow, Kuśhinagara, Lumbīnī- and finally ended at Vaishālī on 21st November.  Venerable monks of the International Saṅgha of LBDFI offered prayers and recited suttas delivered by the Buddha at these sites.  Respected monks and nuns places belonging to other Buddhist countries, and from local Buddhist monasteries at Sārnātha, Kuśhinagara, Lumbīnī and Vaishālī also joined in for the chanting.
I would like to share with you two   highlights of this year’s Dhammayātrā. 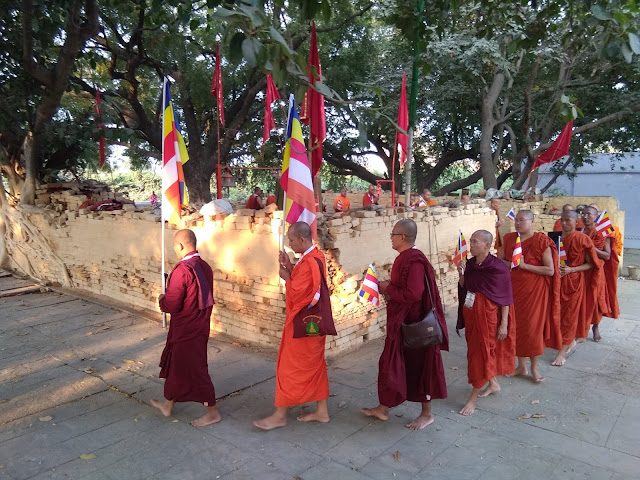 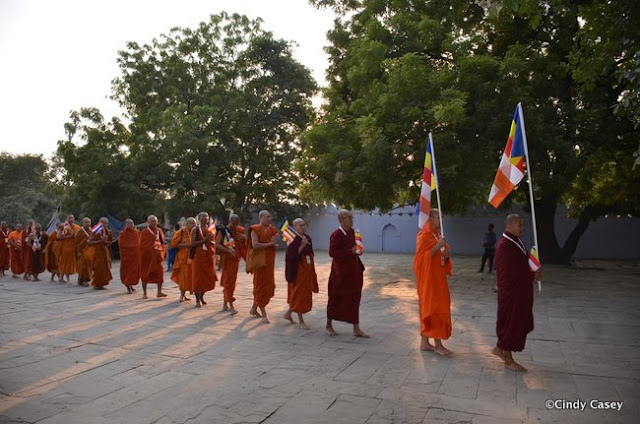 According to Smith, the mosque at Lāt Saraiyā is built over the remains of the Aśokan stūpa while the Aśokan pillar mentioned by Xuanzang is being worshiped as Lāt Bhairav (Staff of Lord Shiva). Xuanzang does not talk about the significance of the place but only tells that the stūpa and pillar erected by Aśoka lie on the traditional route connecting Vārānasī and Deer Park. Two months after his enlightenment on the full-moon day of āsālha (June-July), the Buddha preached the Dharmacakraparvartana Sūtra (the First Turning of the Wheel) to his five former companions, setting in motion the ‘Wheel of Dharma.’ The Buddha on his way to Deer Park may have walked this traditional track.

Also, recent studies suggest that this could be the place where the Buddha received Yasa, the son of a rich merchant from Vārānasī who wished to join the Saṅgha and practice the Dharma closely with the Buddha. Prayers offered by the International Saṅgha at Lat Bhairava is first step towards reclaiming this ancient Buddhist sites. We hope this will help us facilitating revival of pilgrimage to this Buddhist site.

Second, the International Saṅgha circumambulated the Saṅkāsya (Sankissa) village mound.  This is significant because at Saṅkāsya the Buddha performed the miracle of the ‘Descent from the heavens, accompanied by Indra and Brahma’.

According to Chinese monks and scholars Faxian and Xuanzang, shrines were built at the place where the Buddha descended from the heaven. Corroborating the accounts of Faxian and Xuanzang with the ancient remains in the village Saṅkāsya, we may say that the Saṅkāsya village is sitting exactly on the top of the enclosed complex that had monastery, stairs temple and numerous stūpas. Circumference of this high mound pregnant with the ancient shrines is around 1.25kms.  Saṅkāsya is the only one of the Eight Great Places of pilgrimage where the main ancient shrine is still buried and unexcavated.  The International Saṅgha walked in the streets of the village and chanted Buddhist sutras.

Read more about Saṅkāsya
We also got an opportunity to interact with the Dixit family. Dixit family has done a lot towards preservation of the ancient site of Saṅkāsya. Shri Raghav Dixit and his brother showed us lost antiquities that they discovered in the village.  We hope the Dhammayātrā will help us facilitate the generation of awareness internationally and also among the villagers who are living over the buried remains of the very sacred temple of the ‘Descent of the Buddha’.

Amazing description, & thanks for sharing such wonderful informations with us, Thanks for sharing these wonderful images.Your Blog all Post information is very unique and good. I really loved reading your blog. Superb and Interesting post. Thank you for share beautiful and wonderful pictures. Thanks for the effective information. If you have any requirements for Taxi Services in India then you can book through our website.