Chanting of Mahāsatipaṭṭhāna Sutta: Reverberation of the Dhamma in Kurū Land 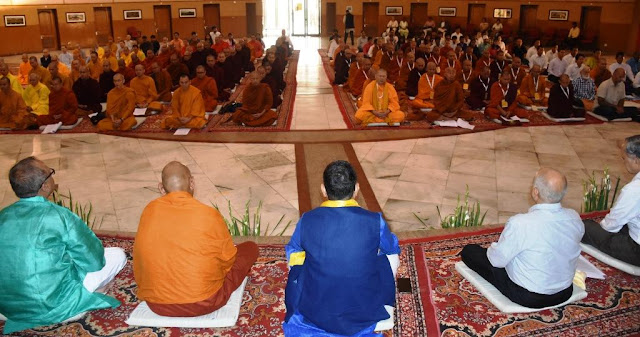 International Buddhist Confederation (IBC), the Light of the Buddha Dhamma Foundation International (LBDFI) and School of Buddhist Studies and Civilisation, Gautama Buddha University together organised a one-day chanting event on 5th November, 2017 at Gautama Buddha University titled “Chanting of Mahāsatipaṭṭhāna Sutta (The Discourse on the Foundations of Mindfulness)”. The event constituted of chanting by a group of sixty (60) venerable monks and nuns from the Theravada tradition interspersed with talks by seven speakers listed namely:

Moreover, by chanting in groups, monks could at once become aware if they had gone wrong in their memorialisation. The practice of collective chanting played an extremely important role in preserving Buddha’s discourses and transmitting them from one generation to the next.

The Mahāsatipaṭṭhāna Sutta has been described as the most important discourse ever given by the Buddha on mental development. It is highly revered by Buddhist sects, but holds special importance for the followers of Theravada Buddhism. This discourse opens with Buddha declaring: There is, monks, this way that leads only to the purification of beings, to the overcoming of sorrow and distress, to the disappearance of pain and sadness, to the gaining of the right path, to the realization of Nirvana—that is to say the four foundations of mindfulness. According to Buddhist source Buddha delivered this discourse in Kammāsadhamma, a township in the ancient kingdom of Kurū. Ancient Kurū comprises of present-day region of Delhi- Kurūkeshetra-Ambala and its immediate neighbourhood.

According to Buddhist tradition, the Kurū Kingdom was ruled by kings belonging to the Yuddhitthila gotta i.e. the family of Yudhishthira (of the Mahābhārata epic). The capital of the Kurū was Indapatta (Indaprastha) in the outskirts of modern Delhi. In Buddha’s time, Kurū was a minor state ruled by a chieftain named Koravya. It is said of this country that its people were wise and had good roots (supporting conditions for the achievement of the noble Dhamma).

They were capable of penetrating a deep Dhamma talk. This reputation is mentioned as the reason for the Buddha having delivered some of his most profound discourses to the Kurūs. Pāli texts particularly mentions about the township Kammāsadhamma which was frequently visited by the Buddha where he gave some of the deepest and subtlest sermons on causation and inner exploration like Mahasatipatthana Sutta, Māgandiya Sutta and Mahānidāna Sutta.

Chinese monk scholar Xuanzang (Hsüan-tsang, 7th CE) visited Sthāneśvar and Śrughna in the (Kurū) region. Xuanzang saw stūpas to mark visit of the Buddha in this area. Xuanzang mentions about hundreds of Buddhist monasteries flourishing in Śrughna. This is also revealed in discovery of numerous Buddhist monastic remains in Chaneti, Shug, Asandh and other places in this region.

Besides stūpas and Buddhist monasteries importance of this region is also reflected from the fact that Emperor Ashoka (3rd BCE) installed Dhamma Pillars at Topra and Meerut. Installation of two Dhamma pillars in this region reflects deep connection of Kurū with the Buddha and his teachings. The Ashokan pillars were transferred to Delhi by Sultan Firoz Shah Tuglaq (1309-1388) as trophies. The Meerut Pillar is currently installed at Delhi ridge opposite the entrance of Bara Hindu Rao Hospital, close to the Delhi University campus while the Topra Pillar is in the grounds of Feroz Shah Kotla.


Special Thanks to Aparajita Goswami
Posted by Deepak Anand at 11:38:00 AM