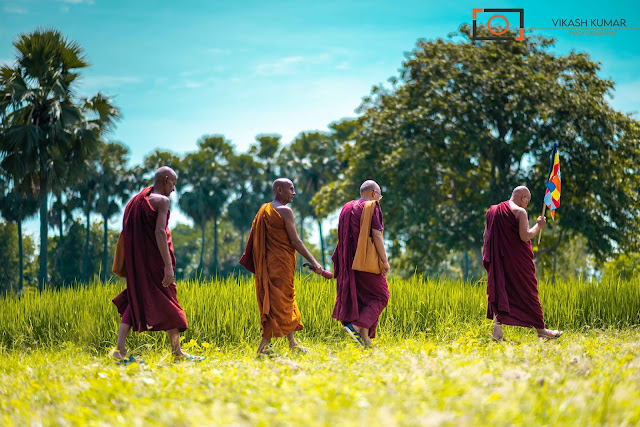 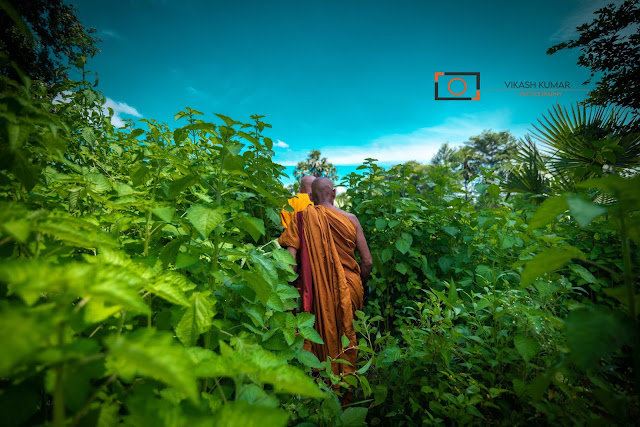 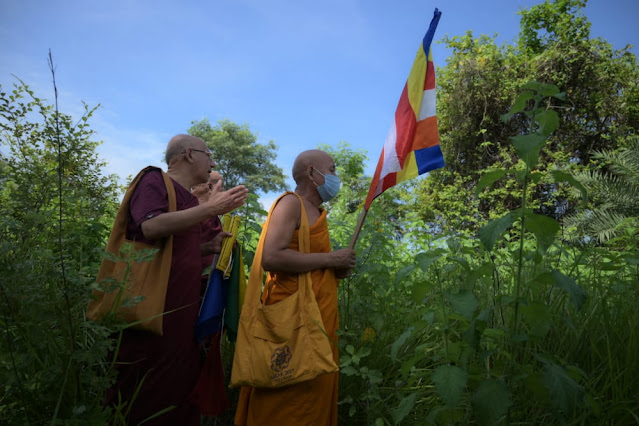 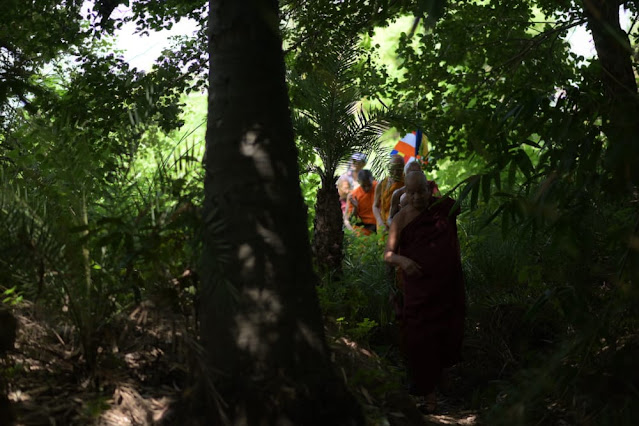 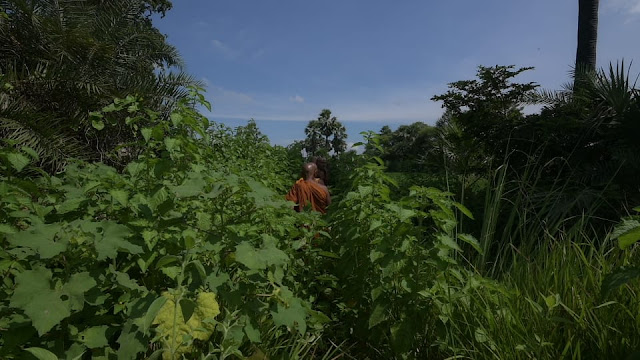 Thanks to all of You!
Please visit the site when you are in Bodhgaya.
Help us make this very sacred site a Living Heritage!
Posted by Deepak Anand at 10:10:00 AM 1 comments

We are aware that Veshākha Pūrṇimā has a special significance in the life of the Buddha. Buddhists celebrate the three most important life stages of Buddha on Vesak Pūrṇimā: Birth at Lumbini, Enlightenment at Uruvelā (Bodhgaya) and Mahāparinirvāṇa (great demise) at Kushinara.

This year’s celebration of Buddha Pūrṇimā is very special to me. Because I was part of a team which facilitated reenactment of a sequence of events that Bodhisattva Siddhārtha underwent at Uruvelā (Bodhgaya) on the day of Veshākha Pūrṇimā.

Ancient literature mentions a sequence of events that starts with a village girl named Sujātā offering milk-rice early in the morning to Bodhisattva Siddhārtha, and ends with his attainment of enlightenment under the Bodhi tree late in the same evening i.e. on Veshākha Pūrṇimā.  Buddhist pilgrims Faxian (5th CE) and Xuanzang (7th CE) have mentioned places associated with these events. These places according to them are on the eastern bank of river Nirāñjanā, further east of village Bakrour (ancient Senānigāma).

Here is a short video of the event.

Some pictures from the event

Our Future Plan
Bodhgaya is the place where Bodhisattva Siddhārtha attained enlightenment. I personally think that the most appropriate way to celebrate Veshākha Pūrṇimā here in Bodhgaya is by enacting all the events that took place on the day of Veshākha Pūrṇimā here (see map).   Enactment of events by venerable saṅgha will not only help in engaging the local community, but also facilitate revitalisation of the places associated with the events. These places are presently in utter neglect. This year, we made a small beginning; but, in coming years, we plan to coordinate with stakeholders to facilitate reenactment of whole sequence of events mentioned in Buddhist literary sources.

Sequence of events that Bodhisattva Siddhārtha went through in Uruvelā on the day of Veshākha Pūrṇimā; 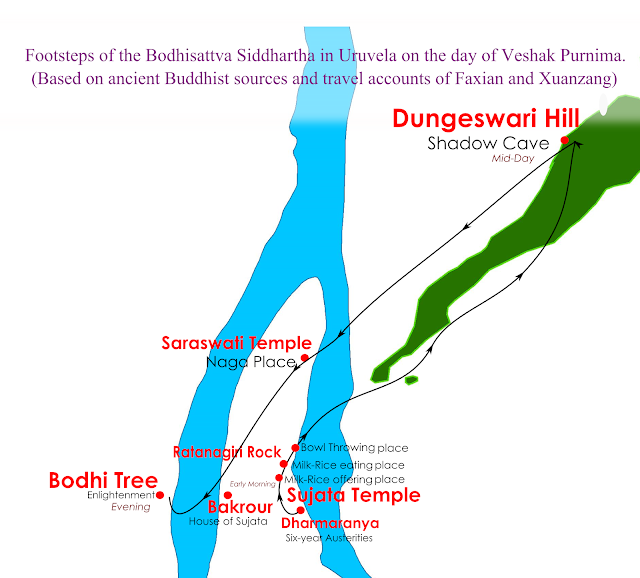 Sequence of events and the places associated with them

In quest of the Truth, Prince Siddhārtha left Kapilvasthu in the middle of the night and reached Rājagṛiha, the capital of Magadha empire at that time.    Seeking places of solitude in which to practice spirituality, Siddhārtha moved to the vicinity of the village Bakrour, formerly the village of Senānigāma, a part of Uruvelā, at that time. Siddhārtha practiced austerities for 6 years at this place now known as Darmāranya.

Early morning- Offering of milk-rice by Sujātā
Early in the morning on Veshākha Pūrṇimā, seeing the emaciated Siddhārtha (the Buddha) sitting under the banyan tree, Sujātā offered Siddhārtha kheer (rice-gruel) in a golden bowl all the while thinking that he was a tree spirit who had granted her wish to bear a son. Experiencing the extreme penance not worthy of spiritual attainment, Siddhārtha accepted the bowl and consequently resolved to follow the Middle Path.  The act of Sujātā offering kheer to Siddhārtha is considered to be a turning point in his journey to Enlightenment.

Early Morning- ate milk-rice offered by Sujātā at Ratanāgiri rock
Faxian (Fahien, 5th CE) - mentions a rock on which Bodhisattva Siddhārtha sat, facing east, and ate the food offered by the village girl Sujātā. According to Faxian the rock was 2 Li (400mts-700mts) north of the place where Sujātā, the village girl offered rice-gruel (milk-rice) to Siddhārtha.
Recently, the Ratanāgiri rock, has been discovered 200mt east of village Bakrour  with the indication of the rock site mentioned by Faxian. Read more about the discovery.

Noon- reached Prāgbodhi hill, in search of new place to start meditative practice
After consuming the milk-rice offered by Sujātā, Siddhārtha embarked again upon the meditative path in order to achieve enlightenment. He left the immediate vicinity of Senānigāma, the village of Sujātā, in search of a new place to make a fresh beginning. In this way, he arrived at a hill which is now called Dungeswari Hill. Xuanzang mentioned this hill as Prāgbodhi Mountain, meaning the mountain leading to perfect enlightenment.  When Siddhārtha climbed to the top of this hill, the earth shook, warning Siddhārtha that this is not the right place to find the Truth.

Siddhārtha, while descending from the hill, found a cave and as he sat down cross-legged, there was another earthquake. Deva (divine being) urged him to go further west to the Pīpala tree, perfect for Vajra Samādhi (admantine absorption). As Siddhārtha prepared to leave, the dragon of the cave urged him to remain. Siddhārtha, to appease the dragon, left his shadow in the cave and departed.

Evening- crossed abode of nāga living by river
On his way to Bodhi tree from Prāgbodhi hill, Bodhisattva Siddhārtha passed by the abode of a blind nāga (cobra). As a result of bad karma in former births, this nāga had been born blind. Naga suddenly obtained eyesight and predicted to Bodhisattva Siddhārtha the attainment of enlightenment that day.
Late evening- took seat under the Bodhi tree
Leaving his shadow in the cave, Siddhārtha then left the eastern bank of Niraňjanā. When Siddhārtha was hundred steps away from the Pīpala tree (ficus religiosa), he received eight handfuls of kusha grass (desmostachya bipinnata ) from a grass-cutter, Sottiya, in order to make a seat for meditation. Bodhisattva Siddhārtha took a seat under the Pīpala tree facing east with a solemn vow: he would not arise from this spot until he attained perfect Enlightenment. Tradition says that as Siddhārtha sat in deep meditation, māra, lord of Illusion, perceiving that his power was about to be broken, rushed to distract Siddhārtha from his purpose.       Finally shouted māra, ‘even if you find out the truth, who do you think will ever believe you? What right do you have to claim the throne of Enlightenment?’

Siddhārtha touched the ground with his hand and replied, ‘The earth will bear witness, to all my past action of purity. At the break of dawn Siddhārtha, the Bodhisattava attained Perfect Enlightenment and became the Buddha.


Special Thanks to Priya Malhotra

Nava Nalanda Mahavihara (Deemed University), Nalanda in Collaboration with  the Light of the Buddha Dhamma Foundation International (LBDFI) organized 5th  Dhamma Walk from Jeṭhian to Rājgir on 13th December, 2018. Objective of the Dhamma Walk was to facilitate awareness generation towards the 15km Jeṭhian - Rājgir Buddha trail.  More than 2000 Venerable monks, nuns and laity from 15 countries participated in the Dhamma Walk.The 15km walk along the footsteps of the Buddha concluded at Veḷuvana, Rajgir.

Community of Jethian offered Saṅghadāna (food-offering to ven. monks and nuns) to the participating monks, nun and laity. This was 4th Saṅghadāna offered by the community. More than 600 Venerable monks and nuns from India, Thailand, Srilanka, Vietnam, Cambodia, Myanmar, Laos, Nepal, Indonesia, Malaysia, Japan and Taiwan with their alms bowl in their hands walked in the streets of the Jeṭhian village and collected food.

After the Saṅghadāna, the monks and nuns gathered for the inaugural session of the Dhamma Walk. As in previous years, this consisted of addresses from the various organizers and important dignitaries. Inaugural address was given by Prof. Baidyanath Labh, VC, Nava Nalanda Mahavihara). Ven. Lama Lobzang (President, IBC), and Dr. Ravindra Panth, former director, NNM also shared their views on the occasion. Ms. Wangmo Dixey (Executive Secretary, LBDFI) gave the thanking note.

More than 100 members of Angel Yoga Group, Nalanda under leadership of Shri Jai Singh participated in the Walk. The members of the Yoga group cleaned up litter off the Buddha Path trail. 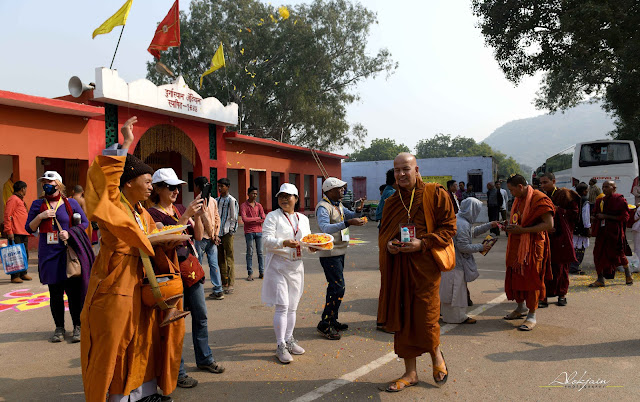 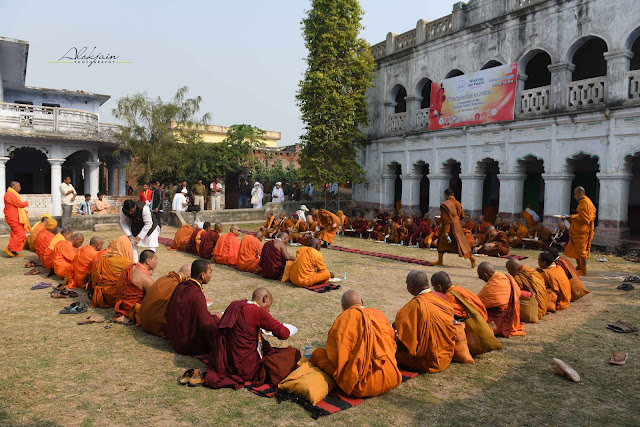 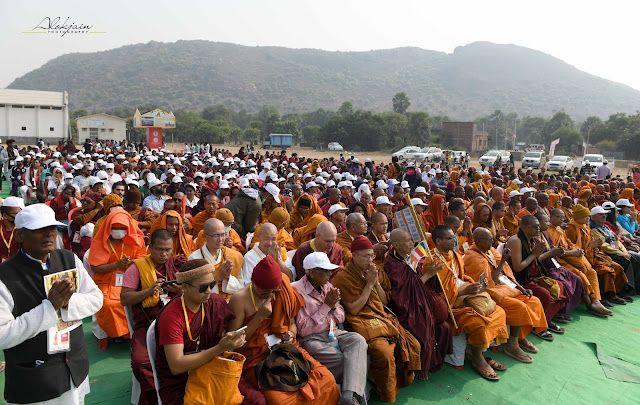 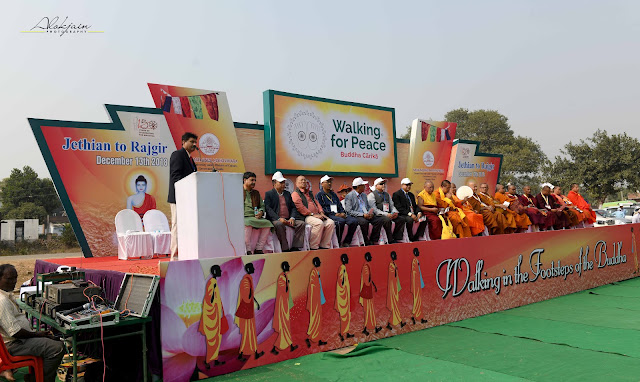 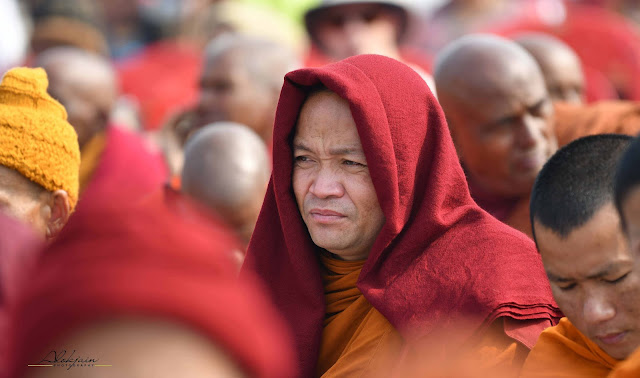 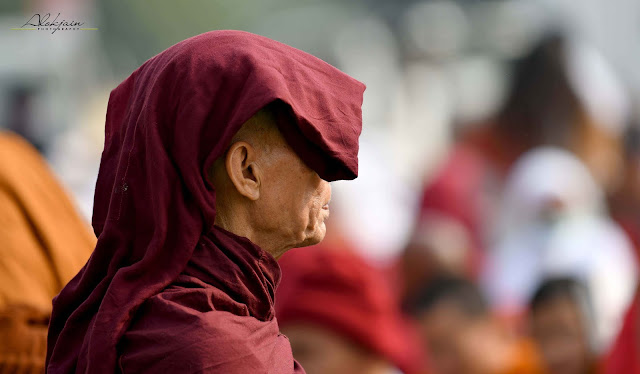 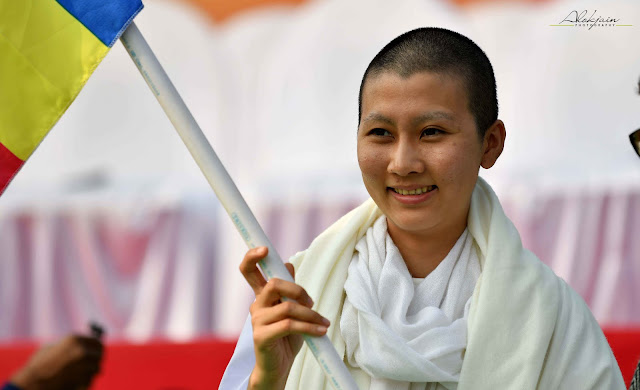 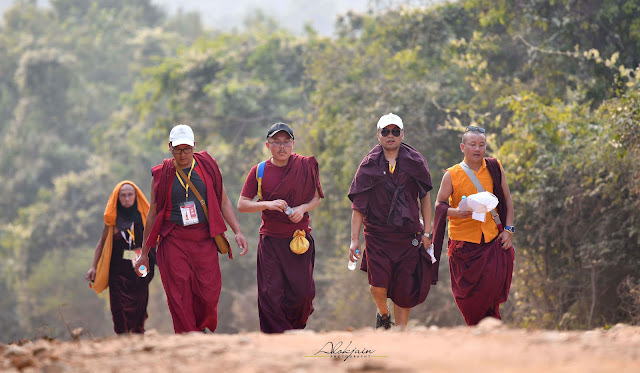 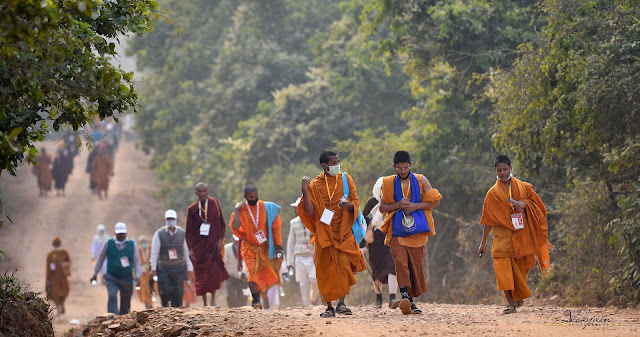 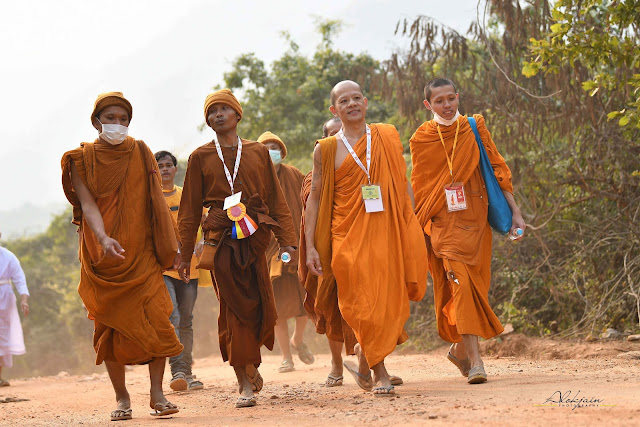 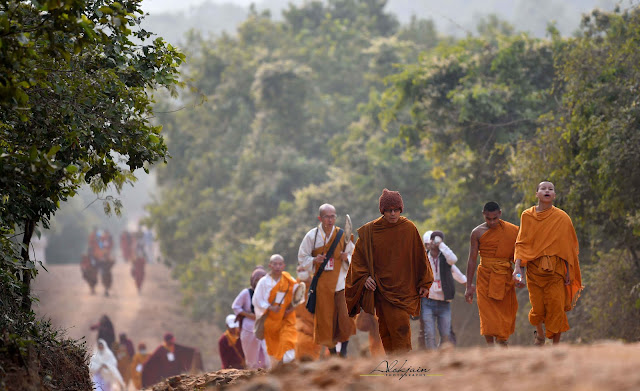 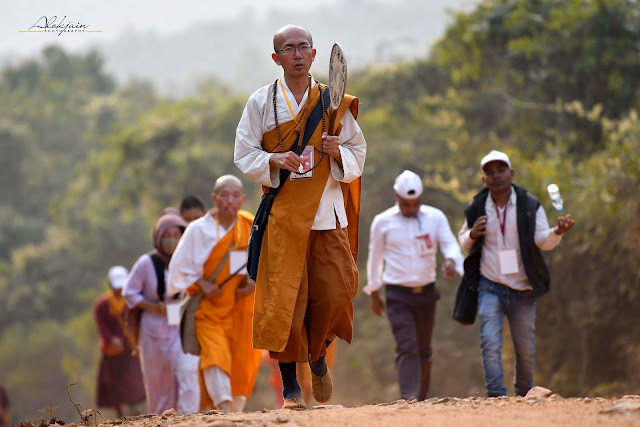 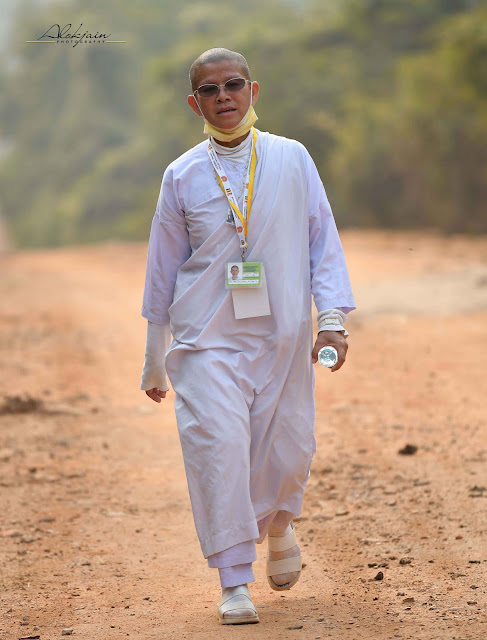 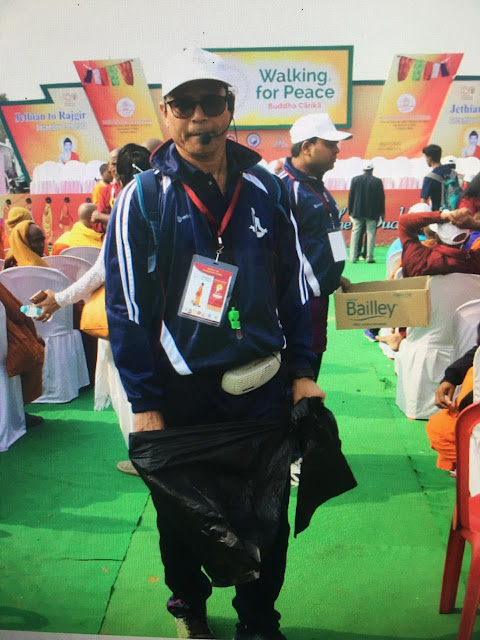 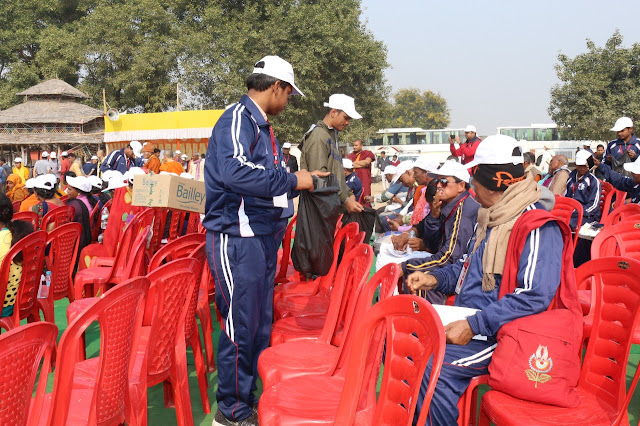 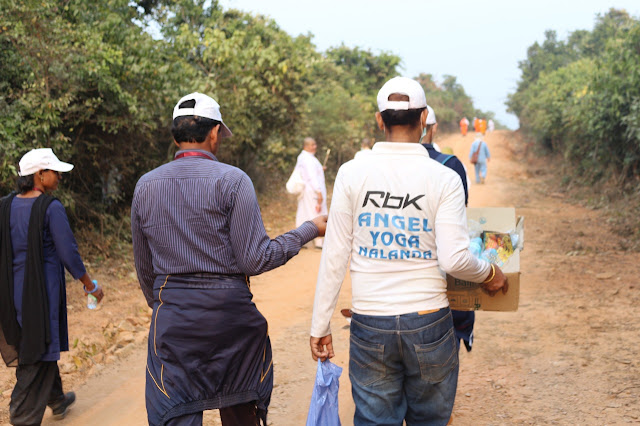