It was an opportunity to share with Hon’ble Prime Minister the contributions of Xuanzang and how to take forward this legacy in integrating the Buddhist circuit in India.

Buddhism was lost in the land of its origin Bihar in 13th century.  The entire tangible and intangible Buddhist links in India were lost. Orientalists until publication of travelogues of 7th CE Chinese monk-scholar Xuanzang believed the images of the ‘Buddha’ with large earlobes and lips and twisted curly hairs to be of African origin. It was only in mid 19th CE when travelogues of 5th CE Chinese monk-scholar Faxian and Xuanzang (7th CE) were translated from Chinese into European languages that revealed Buddhist origin of India and existence of an elaborate Buddhist pilgrimage ‘in the Footsteps of the Buddha’.  Many British explorers including Cunningham    worked very hard in deciphering Xuanzang’s work. All the prominent Buddhist pilgrimage sites including Nalanda, Sarnatha, Vaishali etc now popular were identified on the basis of Xuanzang’s accounts. 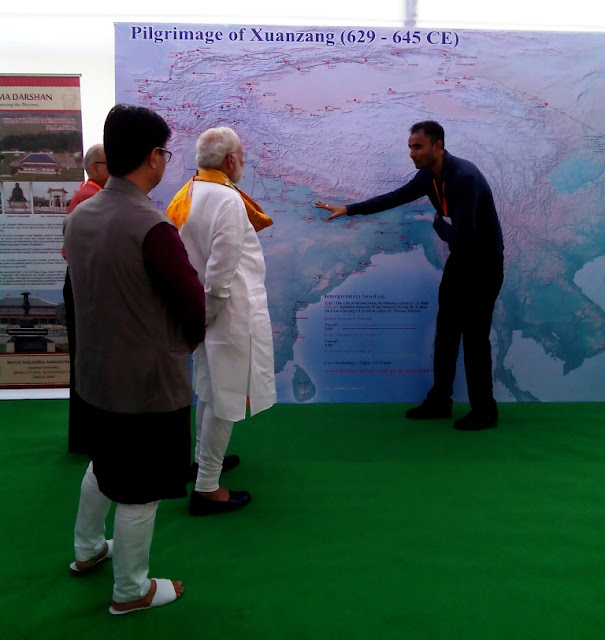 But we have been able to tap only a fraction of what Xuanzang has mentioned. Pilgrimage in Bihar is currently limited to Bodhgaya, Rajgir, Nalanda and Vaishali. Many more important sites are still not on the pilgrimage map. Revitalization of Xuanzang legacy will facilitate expansion of the Buddhist pilgrimage. Also, Xuanzang is an icon and is worshiped by the Buddhists in China, Taiwan, Korea and Japan.  Promoting the legacy of Xuanzang will attract pilgrims from China, Korea, Japan and Taiwan.

Hon’ble Union Minister of State for Home Affairs Shri. Kiren Rijiju was also present on the occasion. Shri Rijiju had arrived one hour before the arrival of the Prime Minister. This gave us an opportunity to discuss the exhibition with him in detail. We shared with him how in ‘The footsteps of the Buddha pilgrimage’ is currently limited to Eight Great Places (Lumbini, Bodhgaya, Sarnatha, Kushinagara, Rajgir, Vaishali, Sravasti and Sankissa) whereas Xuanzang in his accounts has mentioned about existence of an elaborate pilgrimage connecting many sacred spots associated with the Buddha and his prominent disciples. 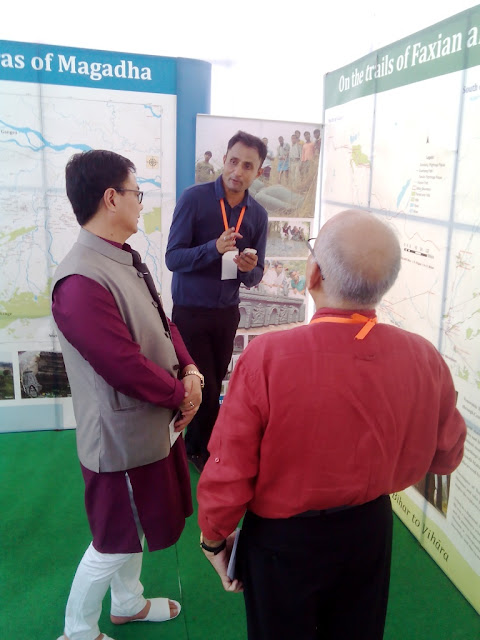 A poster ‘The Sublime Wandering of the Buddha in Magadha’ was developed by us for this occasion. The poster depicts the places (in Magadha) associated with the Buddha and his prominent disciples as mentioned by Xuanzang. The focus is to highlight lesser known sacred Buddhist places. The poster was circulated among the participants of the event. The poster shall be circulated to hoteliers, tour operators, monasteries etc in Bodhgaya, Rajgir, Nalanda and Patna.

Undoubtadly, its a great event. Our Honourable PM is a good listner for any novel idea. And Deepak ji, you and your team under the able leadership of Dr R Pant sir have done incredible job to keep the PM hooked to the concept of 'Engaged Buddhism'. Its not all alone about philosophy or religion but a concrete proposal for Foreign Exchange earnings.

My best wishes to you all.

Hi Deepak, great to see you in the company of great men....!!! Coming back to your blog after a long time...!! But thoroughly enjoying the posts...!!!

Wow, this is probably one of the coolest tutorials I’ve seen. Need to get into this ASAP!